A summit route I've always wanted to do is via Carrington ridge from Holly hut. I've always been a bit put off by either needing to take a sleeping bag and overnight things to spend a night in Holly hut or making a long day of it hiking into Holly hut and then completing a summit.  I've also not been quite sure of the route.

Anyway, my fitness is pretty good at the moment after plenty of recent tramps and climbs and with the weather looking perfect I set off early on Friday morning leaving the North Egmont carpark at around 6:20. It was a stunning clear morning and I as I climbed up the ridge on the Holly hut track I got some stunning views of Ruapehu and Ngauruhoe in the pre dawn light. 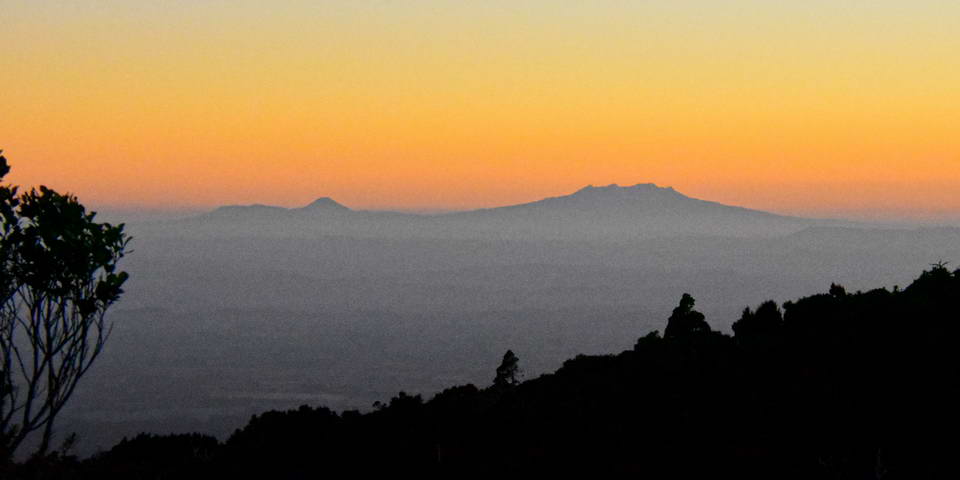 Ruapehu and Ngauruhoe - just before dawn.

It was a calm morning and a very pleasant tramp following the Holly hut track around past the Diefenbach cliffs to the intersection with Kokowhai track where I got some great early morning views over the Pouakais.  The last few times I've taken this track there has always been cloud about either on the mountain or covering the Pouakais or the swamp - Ahukawakawa, but Friday was perfectly clear. 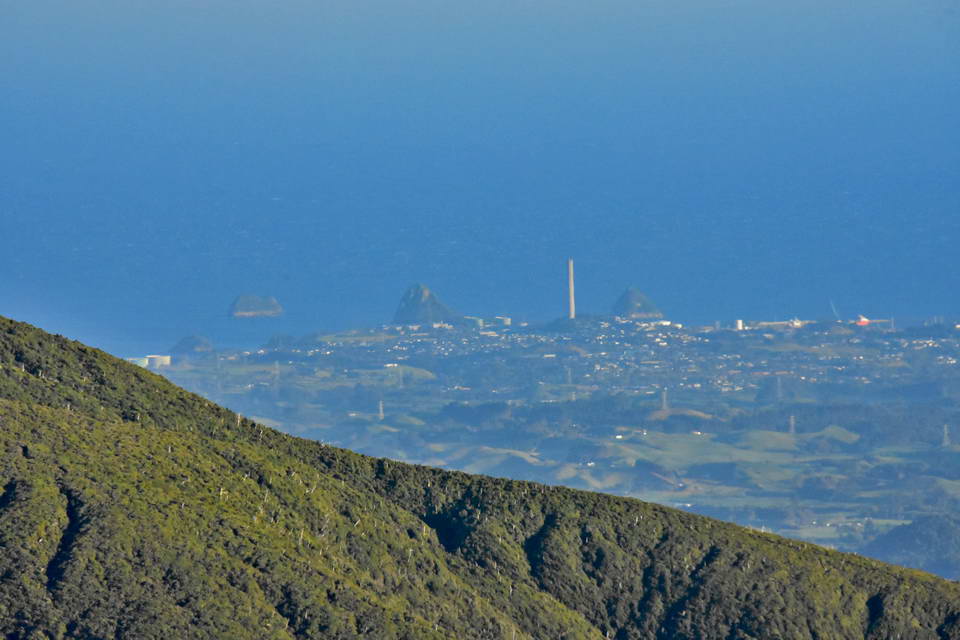 Paritutu and The Sugarloaf Islands seen above the Northern ridge line of the Pouakais. 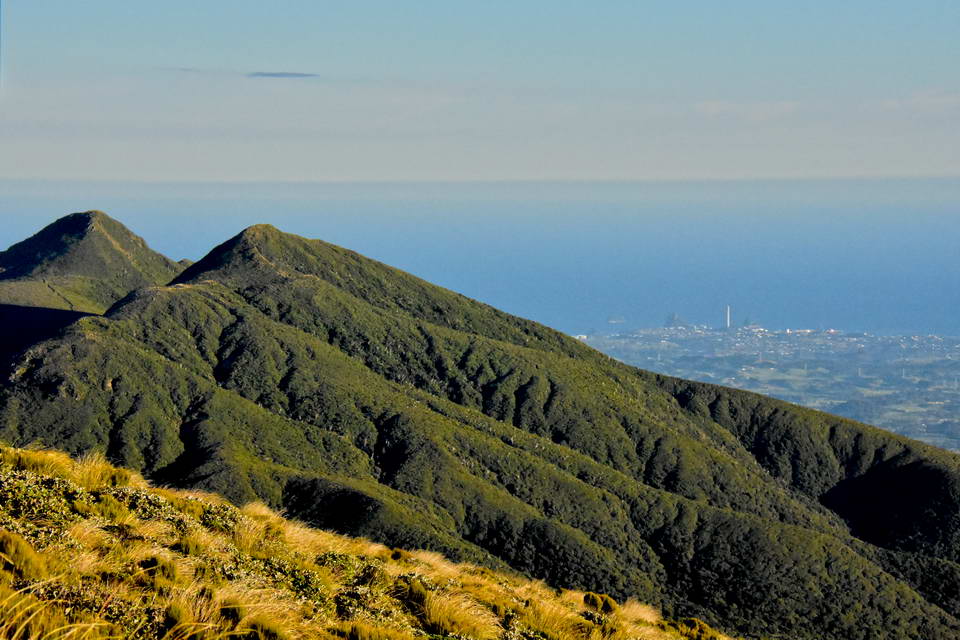 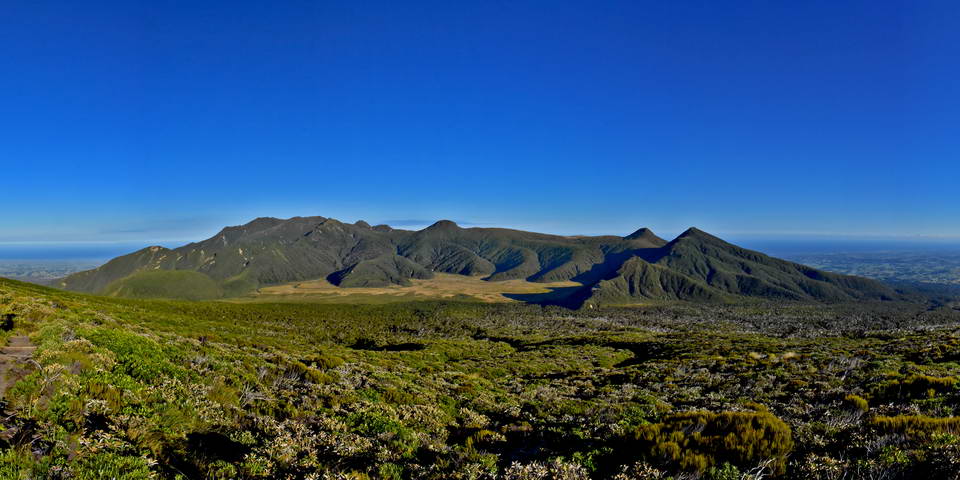 The Pouakai Ranges Spread Out above Ahukawakawa (the swamp).

Some great views of the mountain from the track as it descends to Holly hut. Despite the fact I was in a hurry I stopped several times to take photos. 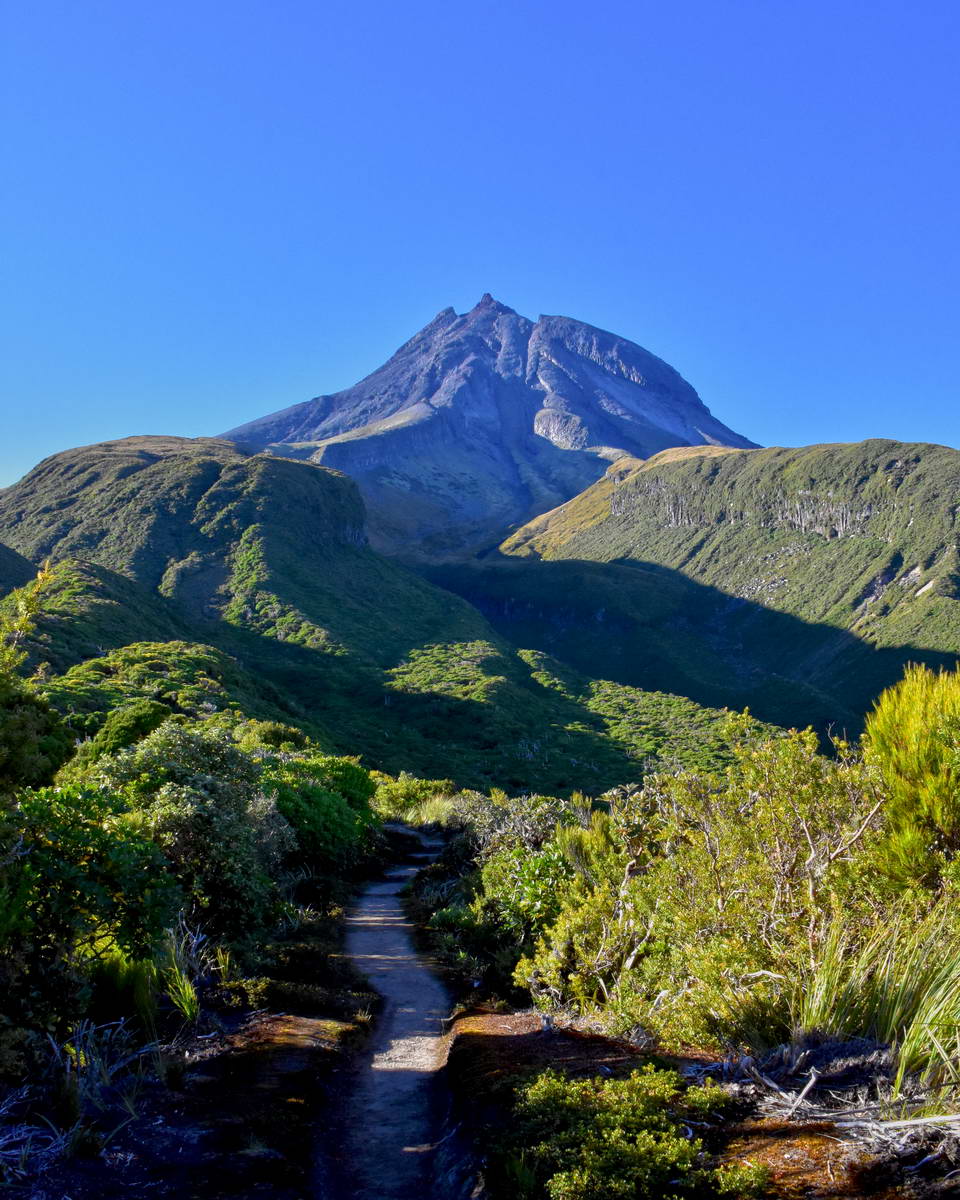 Looking Back Up THe Track At Taranaki with The Turtle Silhouetted on the skyline. 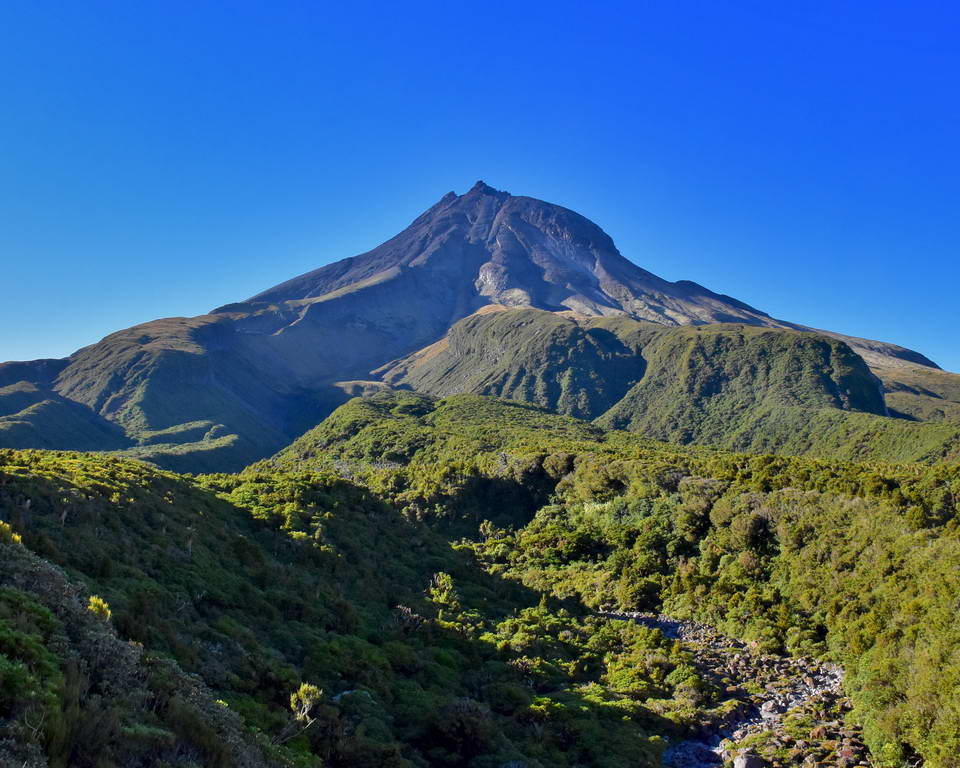 Looking Up The Stream Bed Of The Minarapa Stm towards Taranaki. Carrington ridge is to the right.

I arrived at Holly Hut just before 9:00 and then lost ten minutes trying to find the start of the Carrington ridge track.  This of course isn't an official track so the entrance is not obvious. The track climbed steeply through the bush onto the ridge above Holly hut and then eased off to a gentle incline on a well cleared track through the hebes before reaching a steep buttressed section of the ridge where the track rose steeply and was a bit overgrown.

After what seems a never ending climb up through the hebes you emerge onto the upper ridge line onto a poled track through the tussock with great views of both the mountain and the Pouakais. 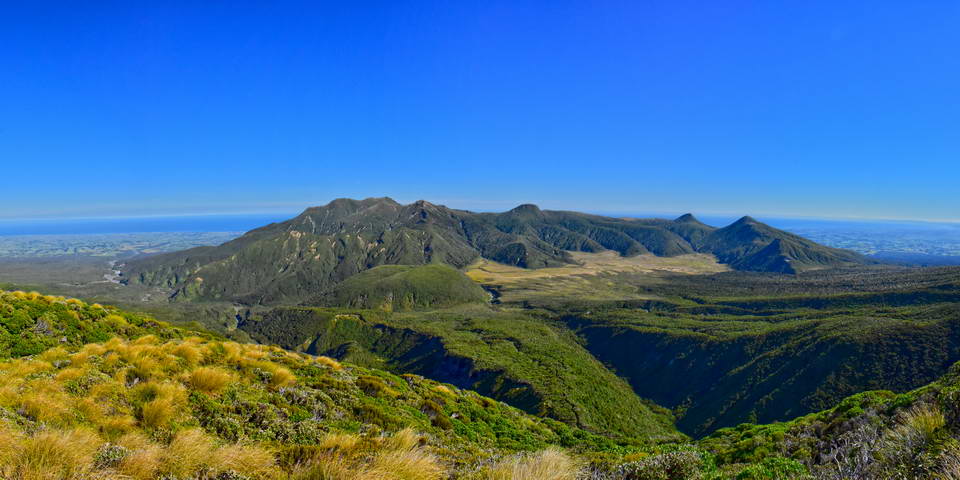 A Glorioius view of the Pouakais and the Dome looking over the lower section of Carrington ridge. 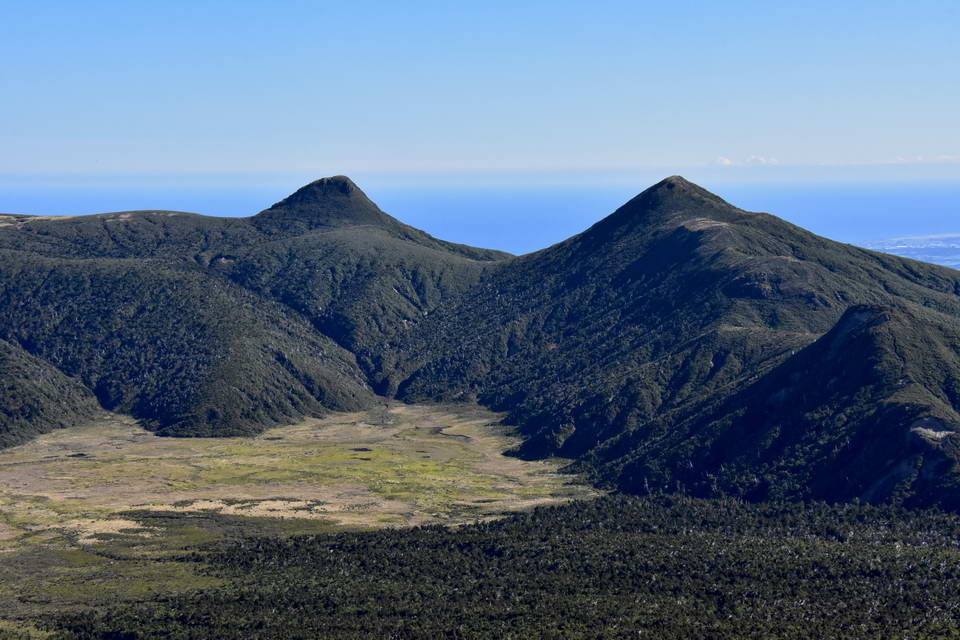 Maude and Henry Peaks rising above Ahukawakawa at the northern end of the Pouakais. 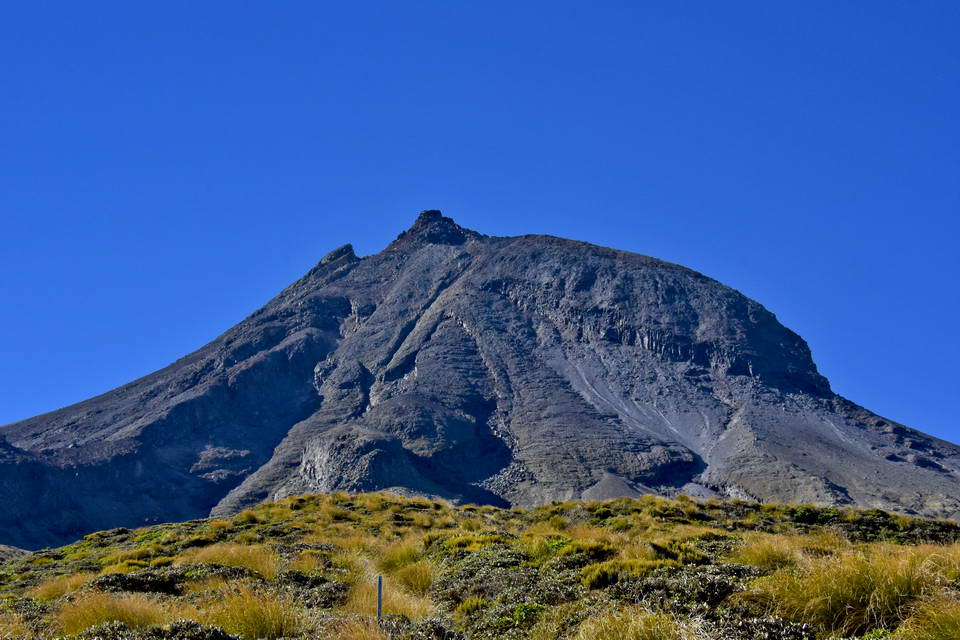 Looking Up At Taranaki from the Tussock on Carrington Ridge. The Turtle dominates the skyline to the right. The Hammer can be seen just above the tussock.

It was a very pleasant hike up through the tussock and the moss slopes up to the Hammer. There were plenty of wild flowers out and the moss slopes on this side are pretty much undisturbed. In places the track all but disappears amongst the tussock but the poles keep you on track as you head on up the ridge line. The views out to the west over the Pouakais get ever more expansive as you gain height. 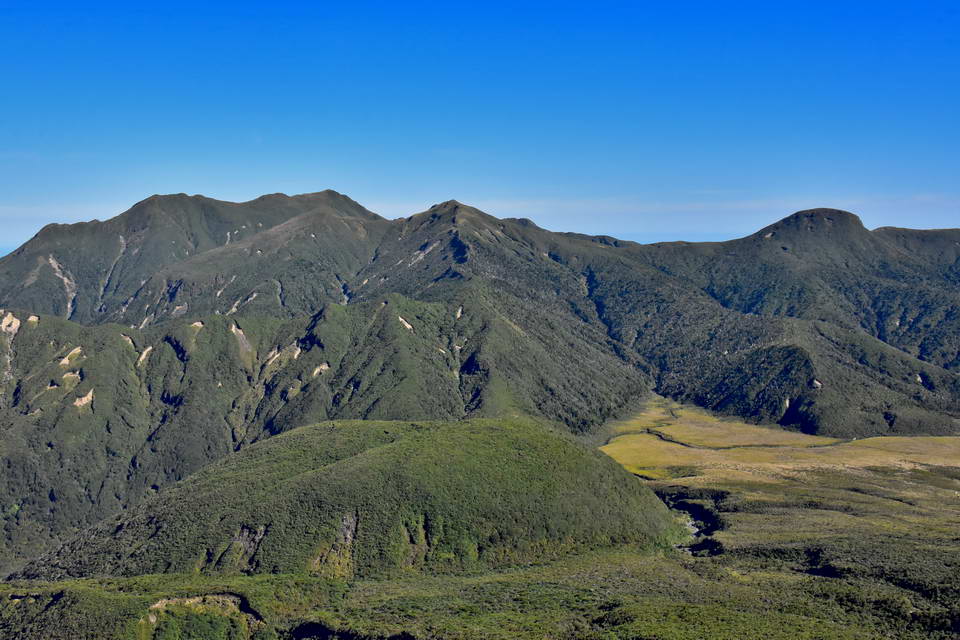 The main massif of the Pouakais with the Dome in the foreground and the Hump on the skyline to the right. 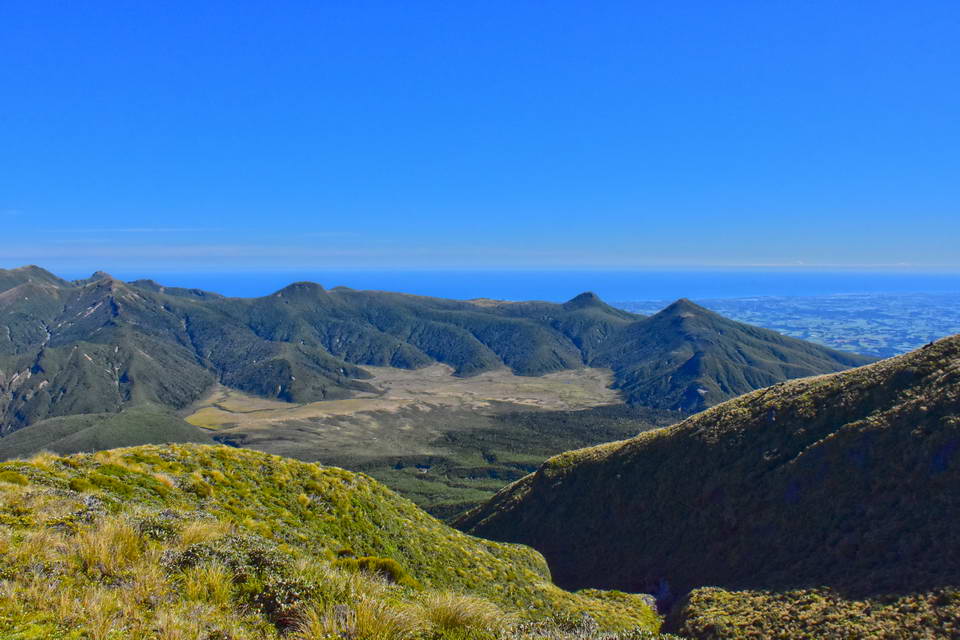 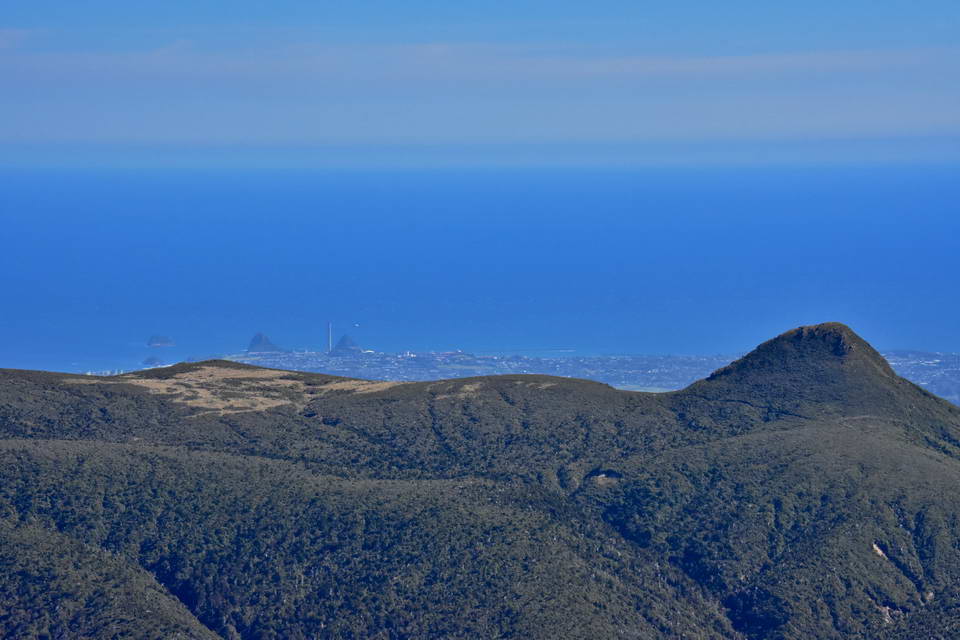 The Sugarloaves and Port Taranaki appearing just above the top of the Pouakais. Maude peak to the right. 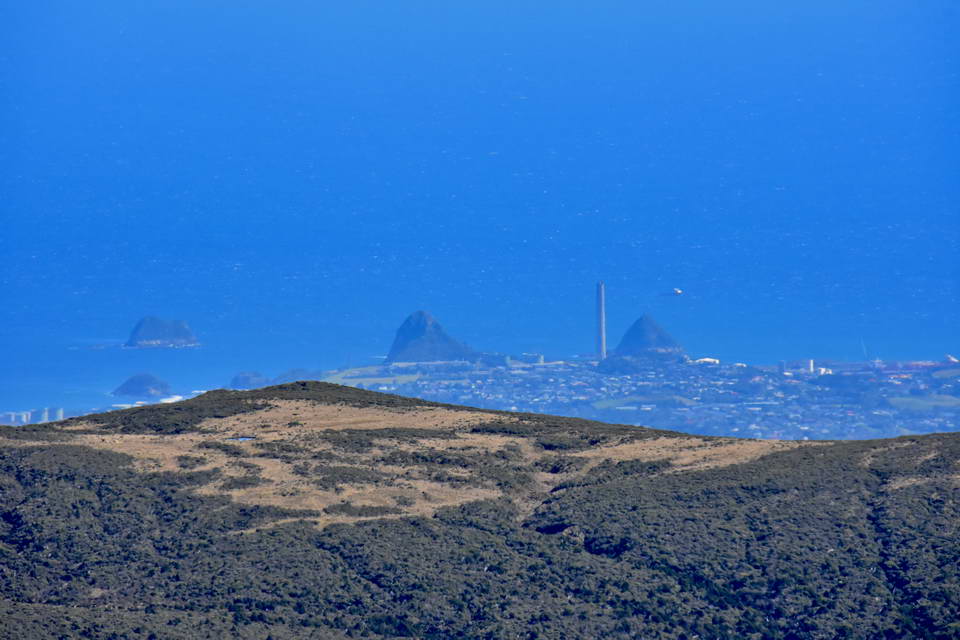 A close up of Paritutu and The Sugarloaf Islands. You can make out Pouakai tarn to the left. If you look closely you can make out some tiny figures of people at the tarn - thats about as close as I got to seeing anyone on this side of the mounatin.

A Panoramic View Over The Pouakais. Sawtooth ridge to the right. 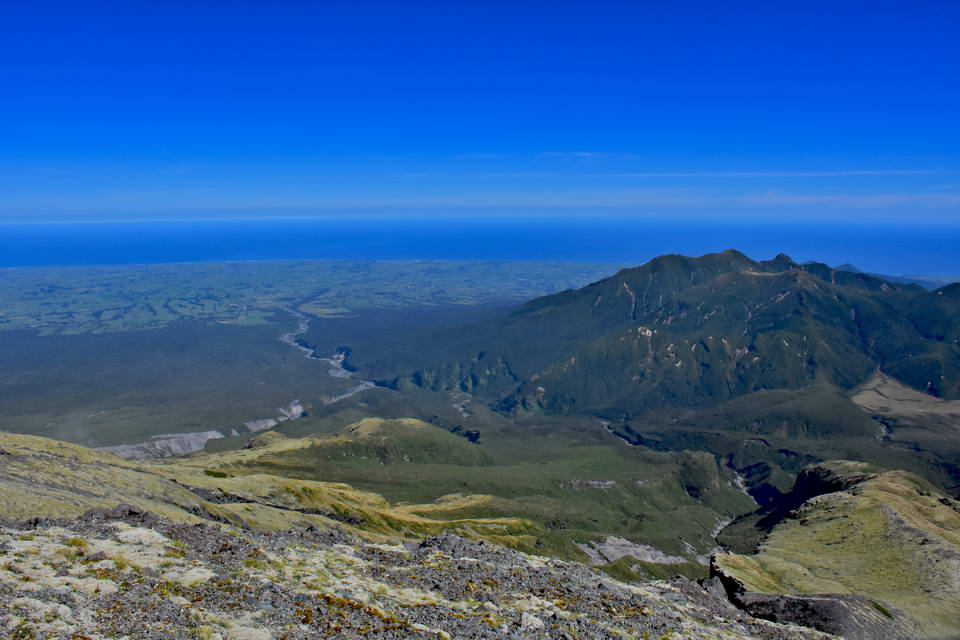 This View Looks Down the Course Of the Stony River (Hangatahu) with the Pyramid Stream cutting into it from the left. 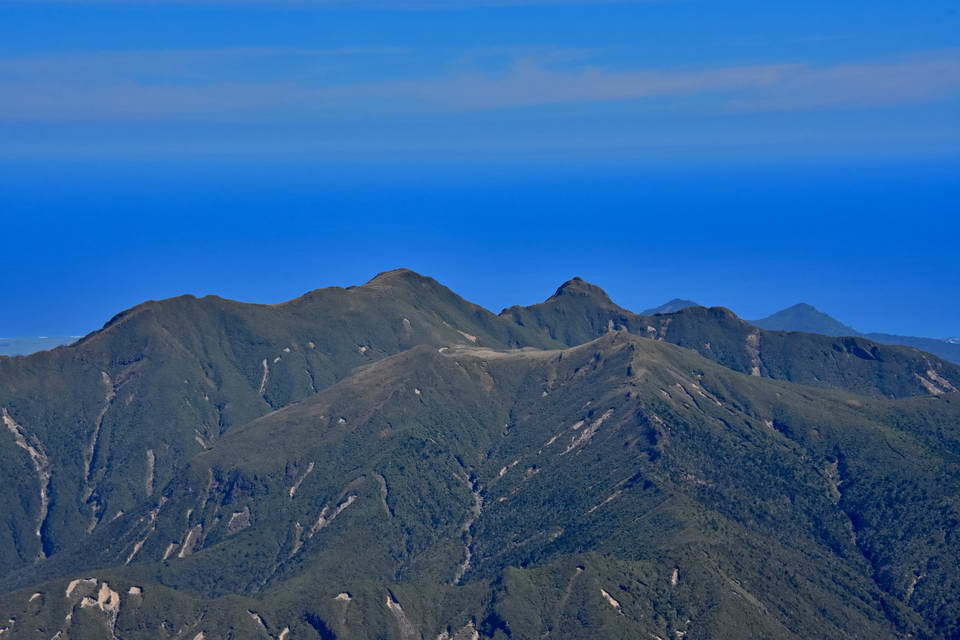 The Top Of The Pouakais. Pouakai peak is the high point near the centre with Kiri peak in the background. Tatangi is the peak in the foreground. 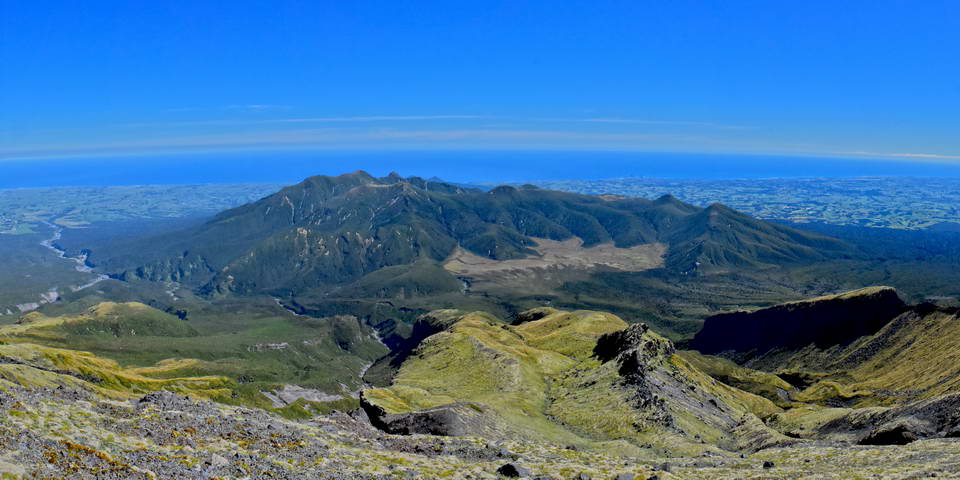 This View Of The Pouakais Is From Just Below The Hammer. 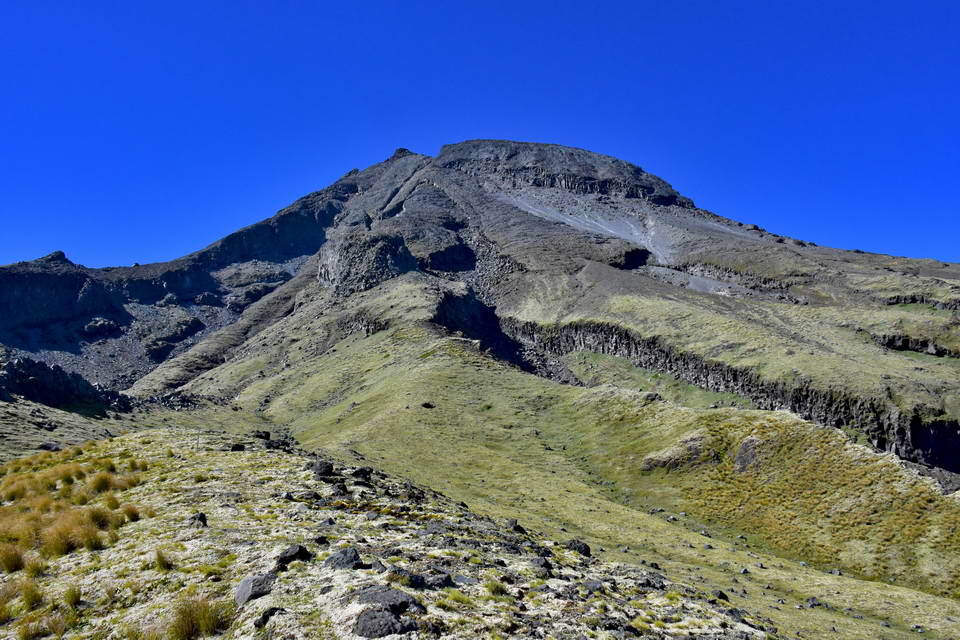 Looking Up At The Hammer (left of centre) and The Turtle.

At the top of the moss slopes the route has a steep climb over the Hammer, then through some loose scree before gaining the hard lava flows on the upper section of Carrington ridge. THe climb from here up to the Turtle is quite steep but very enjoyable due to the firm rock though the last section climbing up to the nose of the Turtle is quite loose.  I started getting cramp in my legs as I was climbing up the steeper sections of rock and had to take a less steep traverse zigzagging up this section to avoid further cramp. 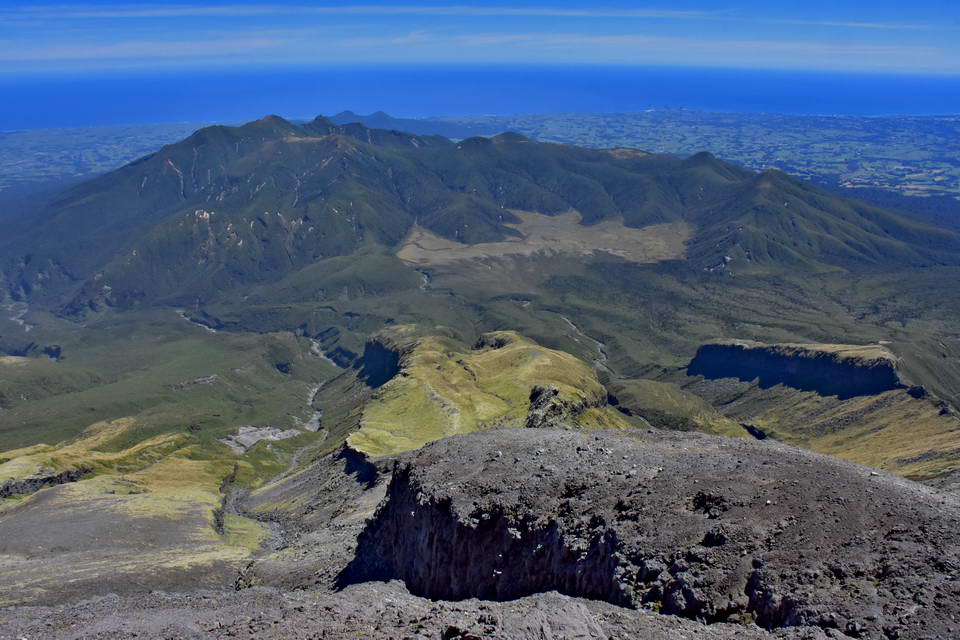 Looking Down Over The Hammer At the Pouakais With the Kaitakes Now Appearing In The Background. 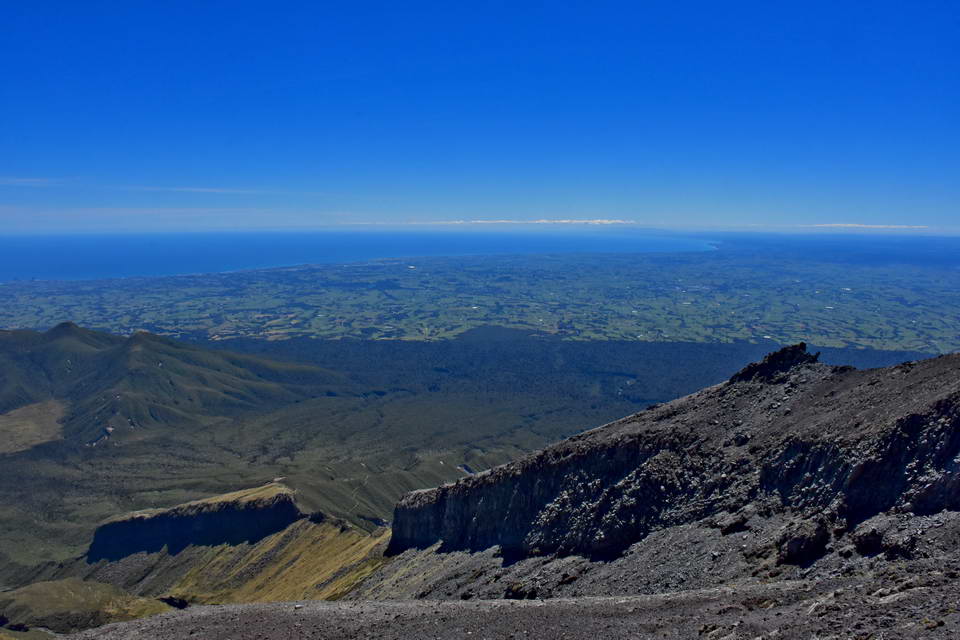 The North Taranaki coastline from just above the Hammer. 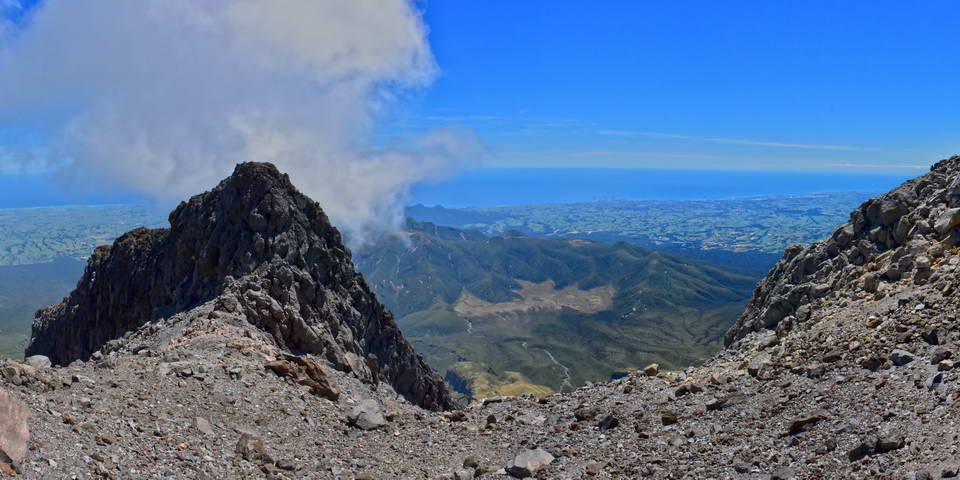 This is the Top of the Turtle. A small wisp of cloud appeared over the Turtle and Refused To Go.

The climb  above the Turtle up to Heberly ridge is quite gentle through some quite loose material. The final pitch to the crater is across some loose unstable material as you traverse across Henberly ridge. I think a direct traverse into crater valley may have been an easier route than the path I took angling up Heberly ridge directly into the crater.

From the crater its a 10 minute scramble up onto the summit where I arrive at around 1:45pm. Apart from the whisp of cloud that hung around to the west over the Turtle, it was completely clear with a gentle breeze on the summit.  This was a very enjoyable climb but definitely one for the more experienced climber.

I took a well earned break on the summit, had some lunch and then headed off down the main summit track to North Egmont pausing on my way off the summit peak to take the following photos. Got back to my car at 4:30 pm. 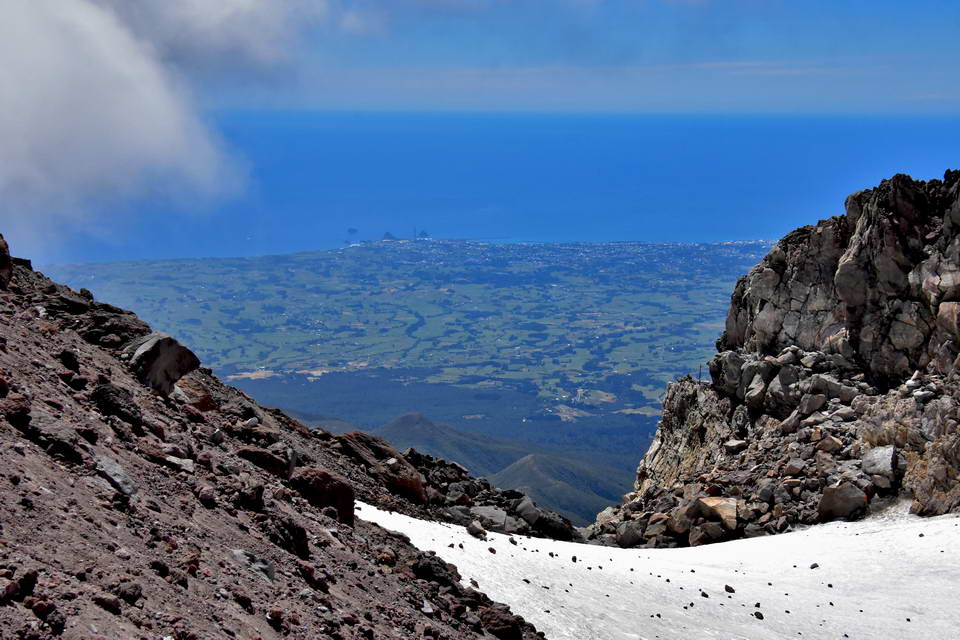 Looking Out Over the crater towards the Sugarloaves and New Plymouth. 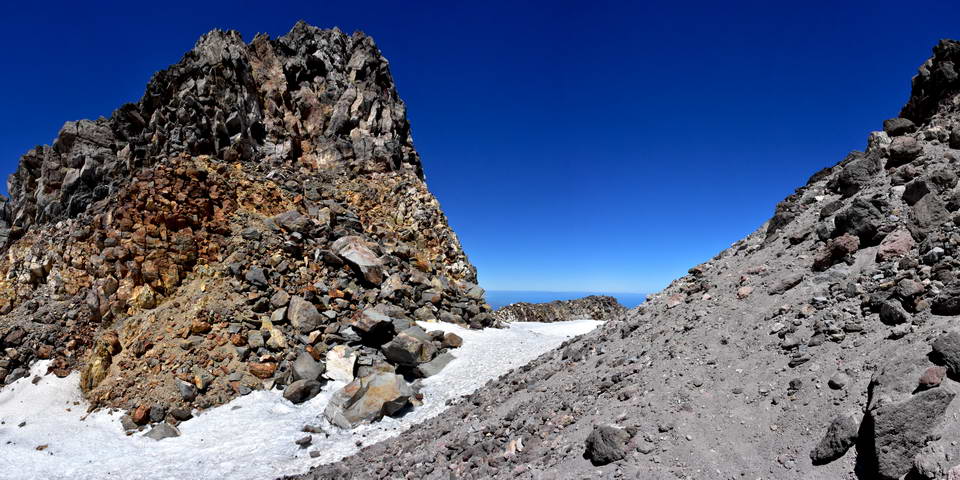 Sharkstooth - not much snow left in the crater. 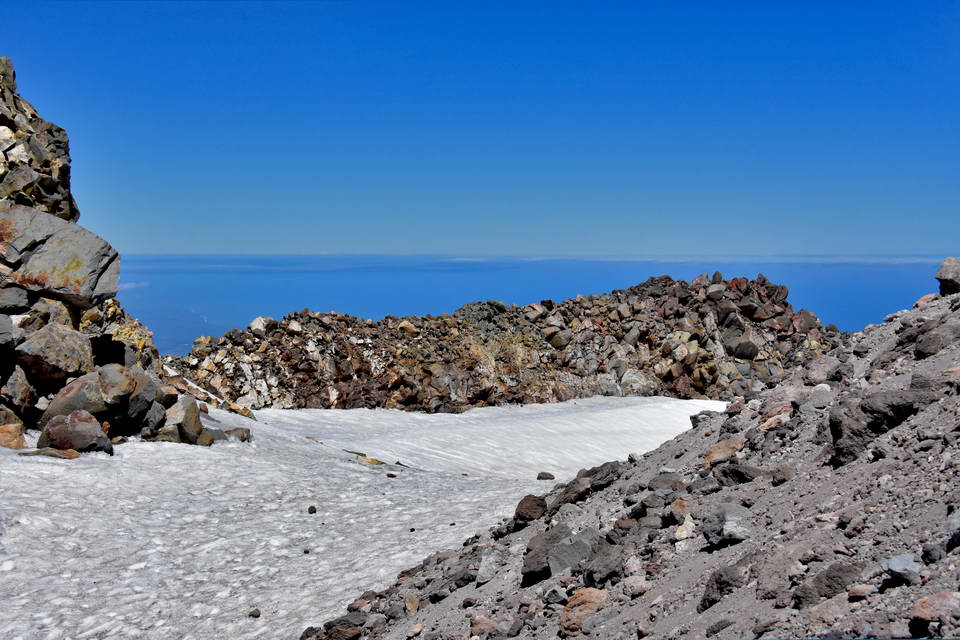 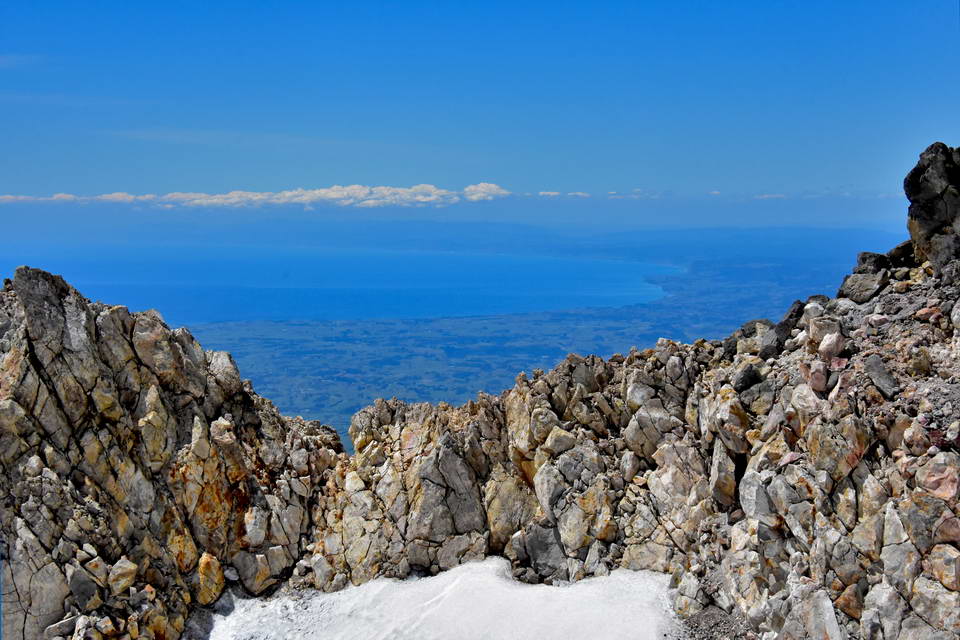