One of my favourite summer routes to climb Taranaki is East Ridge starting from the Stratford Plateau. I like this route because

The only downside is that the steep rock lava flows make it a hard descent so the normal way down when climbing east ridge is to descend down the North side to Tahurangi lodge and then take the round the mountain track to get back to the plateau.

This is a route for the experienced tramper or climber as it is not well marked  and once you're on the rock it's a steep ruggard climb with no track. The descent into the crater through the chimney is also steep and challenging.

Anyway, after completing a sunrise climb last weekend I thought it was time to do another climb up East ridge. Caleb,a friend from work, had expressed an interest in climbing from this side so we agreed to meet up at the plateau  on Saturday morning. We wanted an early start to beat both the midday heat and hopefully also get to the summit before any cloud formed which often happens late morning during summer.

We set off by torchlight at 5:20am and made good progress through the Manganui gorge and up through the ski field onto the tussock slopes.  The summit route veers off to the right at the top of the first ski lift and then traverses across the valley to the right onto the next ridge as the tussock gives way to moss.  We were on this ridge in the moss slopes when the sun rose behind us. 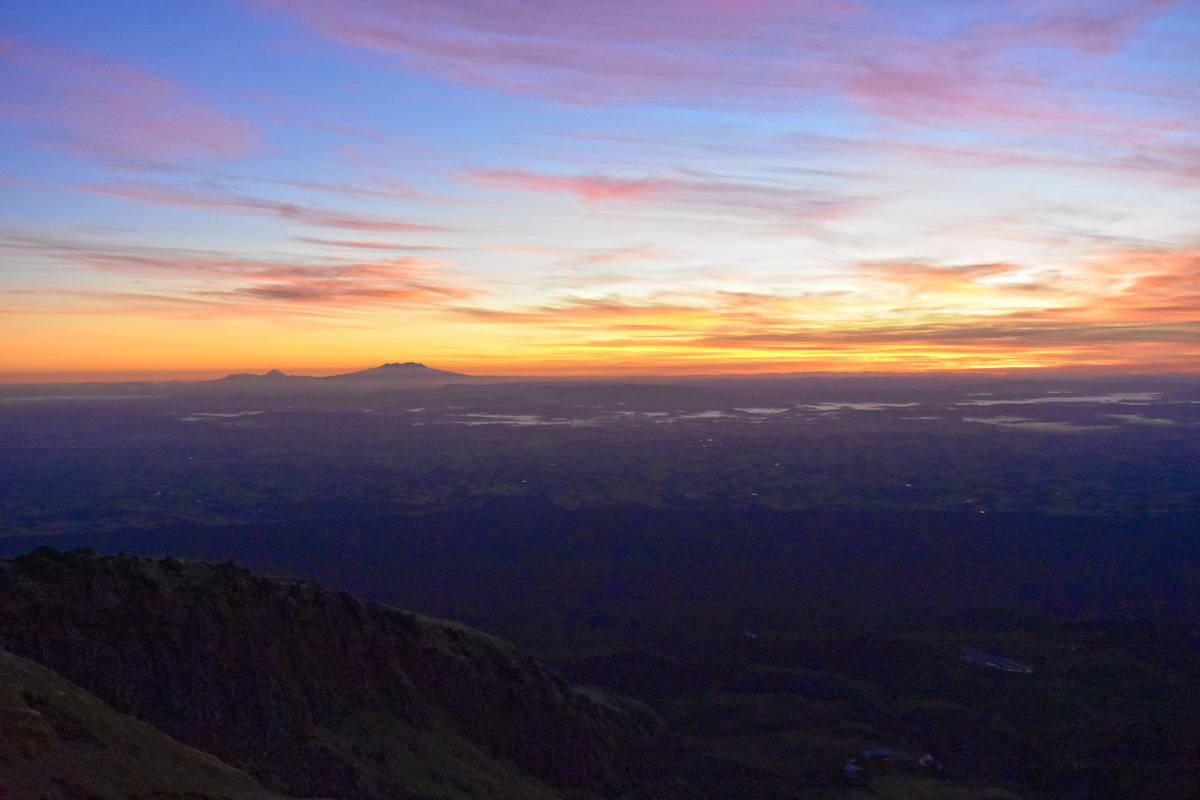 A stunning sunrise from East Ridge with Ruapehu, Ngauruhoe and Tongariro silhoutted on the horizon 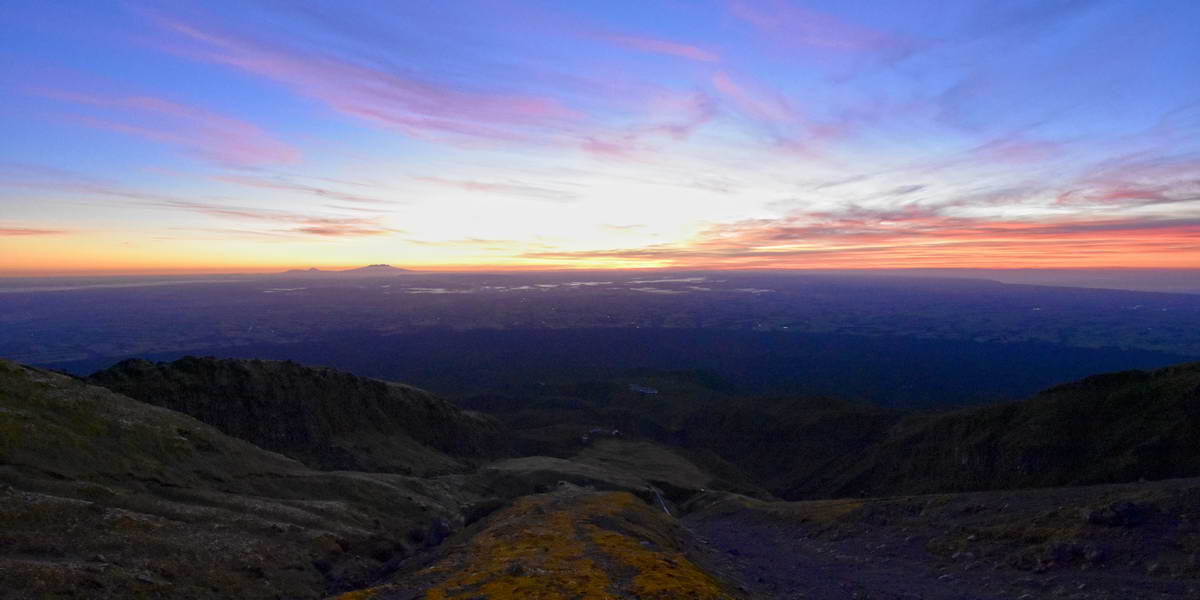 Wide angle view of the dawn sky with the moss slopes in the foreground.

From here the track traverses across under some small bluffs to the next ridge and then up to the base of the policemen. From the policemen you get on to the hard rock of the old lava flows though there are few sections of loose broken rock and scree to negotiate. Once I reach the rock I always traverse across to the right as I find that this side of east ridge is generally more solid rock and avoids the sections of loose scree.

It was a beautiful morning with barely a breath of wind and very little cloud. We made good time scrambling up the steep rock stopping ocassionally for a breather and drink of water.

This is one of those routes where you keep looking up thinking you're getting no closer to the top, although when you look down you realise how far you've come.  Eventually as you climb, you enter an area where the colour of the rock changes - less dark grey and with a slight red tinge,which is a sign that you're getting near the top. Then suddenly you find yourself up at the crater rim at the point where the chimney leads down into the crater.  From here its just a short scramble up the rocks to the top of sharkstooth where we stopped for a rest and bite to eat.

The views from the top of sharkstooth were great with very little cloud. 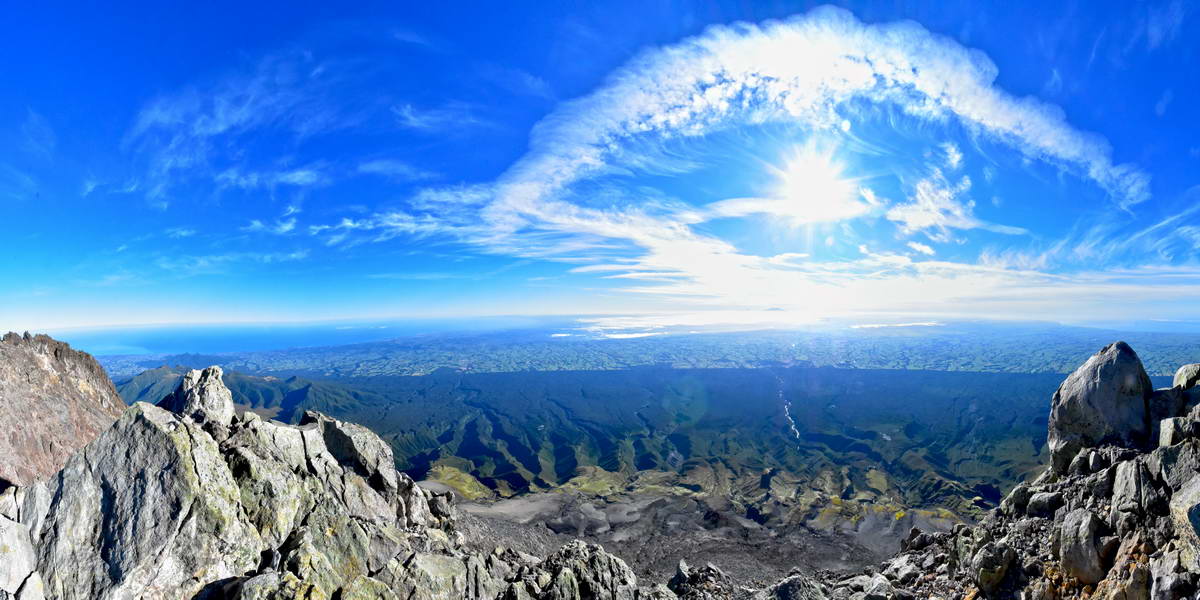 A 180deg panorama looking north east from the top of sharkstooth. Part of the summit peak is on the left with the Pouakais and Kaitakes partly obscured by the ridgeline of sharkstooth. 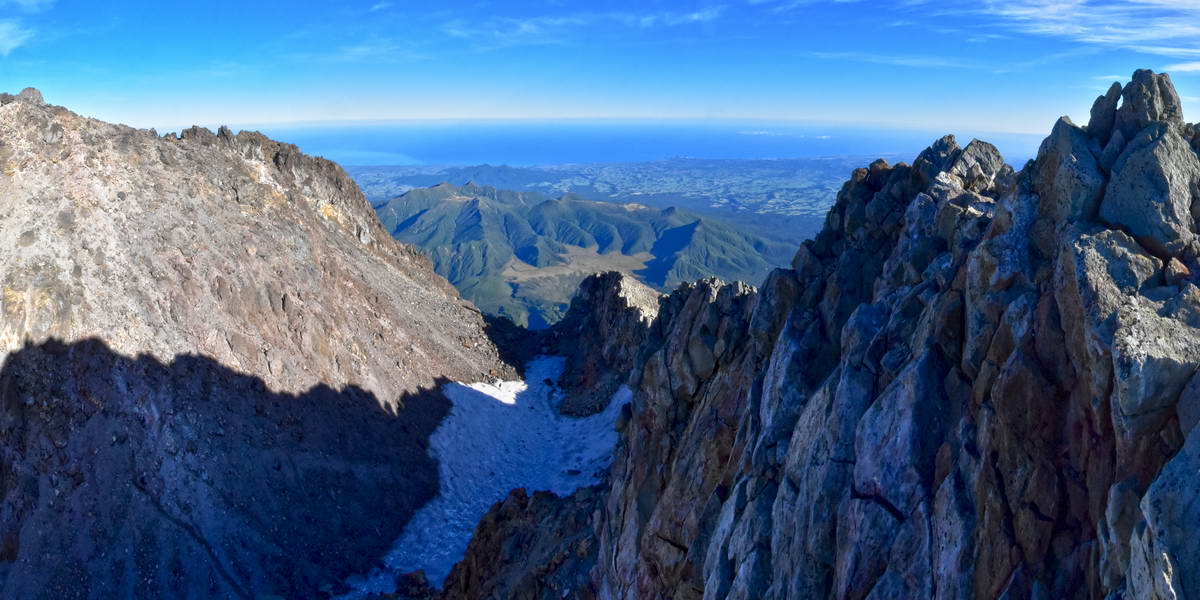 This shot is taken from the southern side of Sharkstooth looking west down over the crater and out over the Pouakais and Kaitakes. The summit peak is to the left - summit rock right on the edge of frame, and the top of sharkstooth on the right. 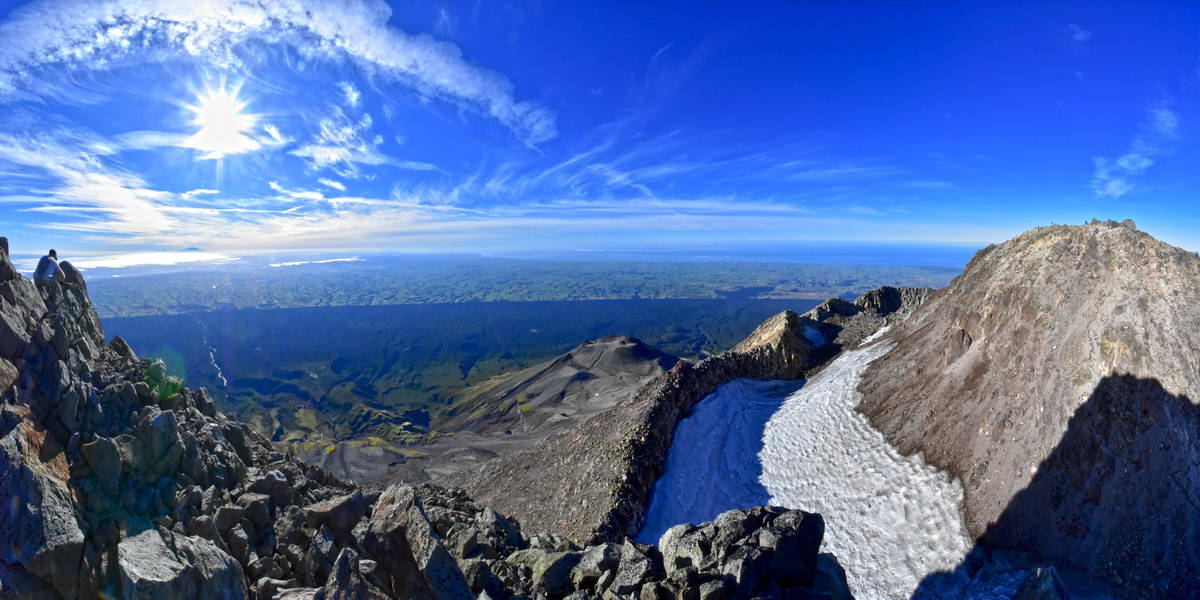 South East from Sharkstooth.  The summit peak is on the right, with Fanthams peak near the centre. The top of sharkstooth is to the left with Caleb sitting on the rocks.

From sharsktooth, you need to descend through the chimney into the crater to get across to the summit. The chimney is a steep narrow climb down through a cleft in the rocks. You emerge into the crater at the top of the steep and partly unstable rocky slope at the base of sharkstooth.  I'm never quite sure of the best route down from here as you can go to either the left or right - both are a bit tricky and you need to take care. We chose to move to the right and after a careful scramble down through the rocks made it to the bottom of the crater to cross a narrow strip of snow leaving just the final climb up onto the summit.

It was one of those rare days where there was no wind and no cloud around the Taranaki coast line.It was a superb morning and a thoroughly enjoyable climb. 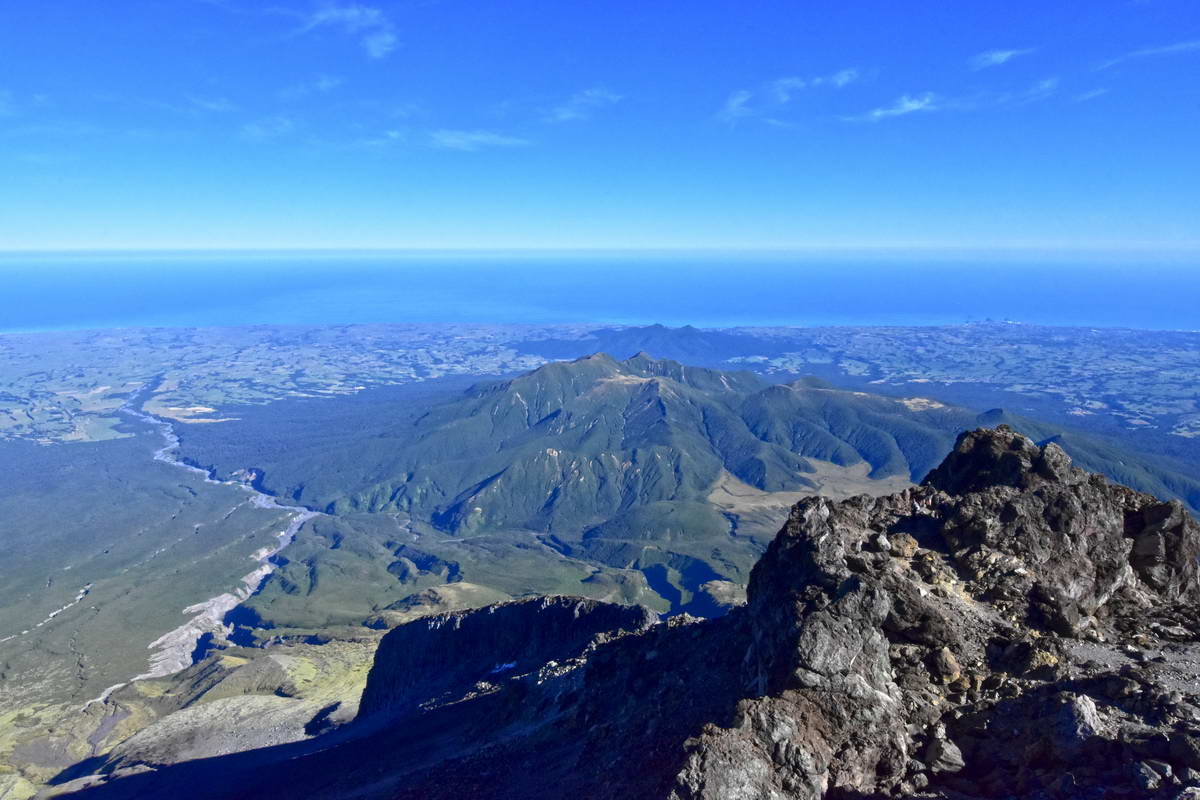 Looking down over the Pouakais and Kaitakes from Summit Rock. 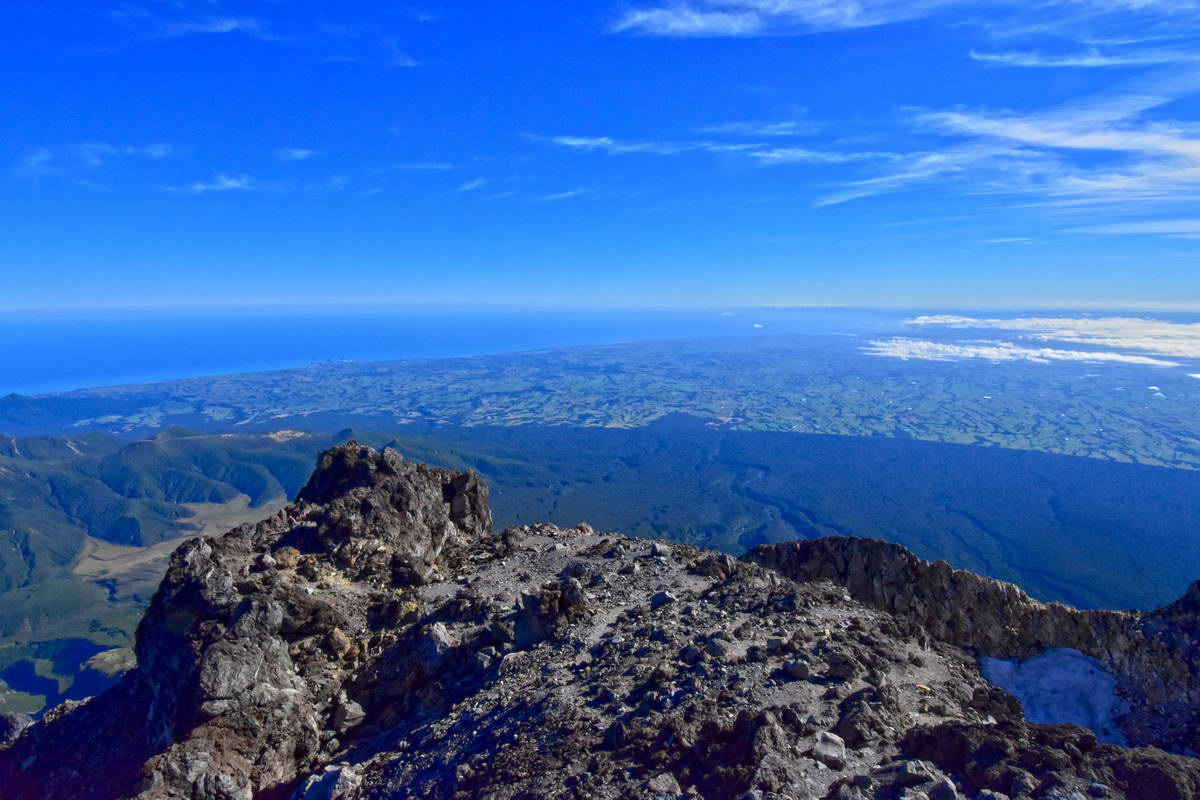 Looking North up the Taranaki Coastline 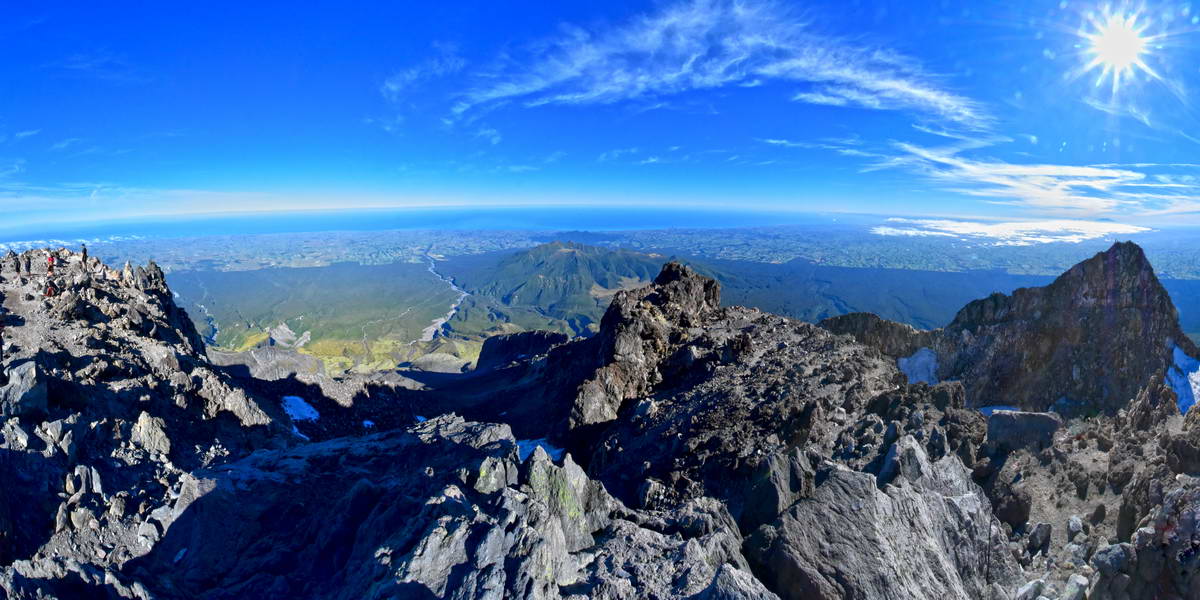 A wide angle panorama taken from summit rock spanning around 240deg. with the southern end of the summit to the left and sharkstooth and the rising sun to the east. 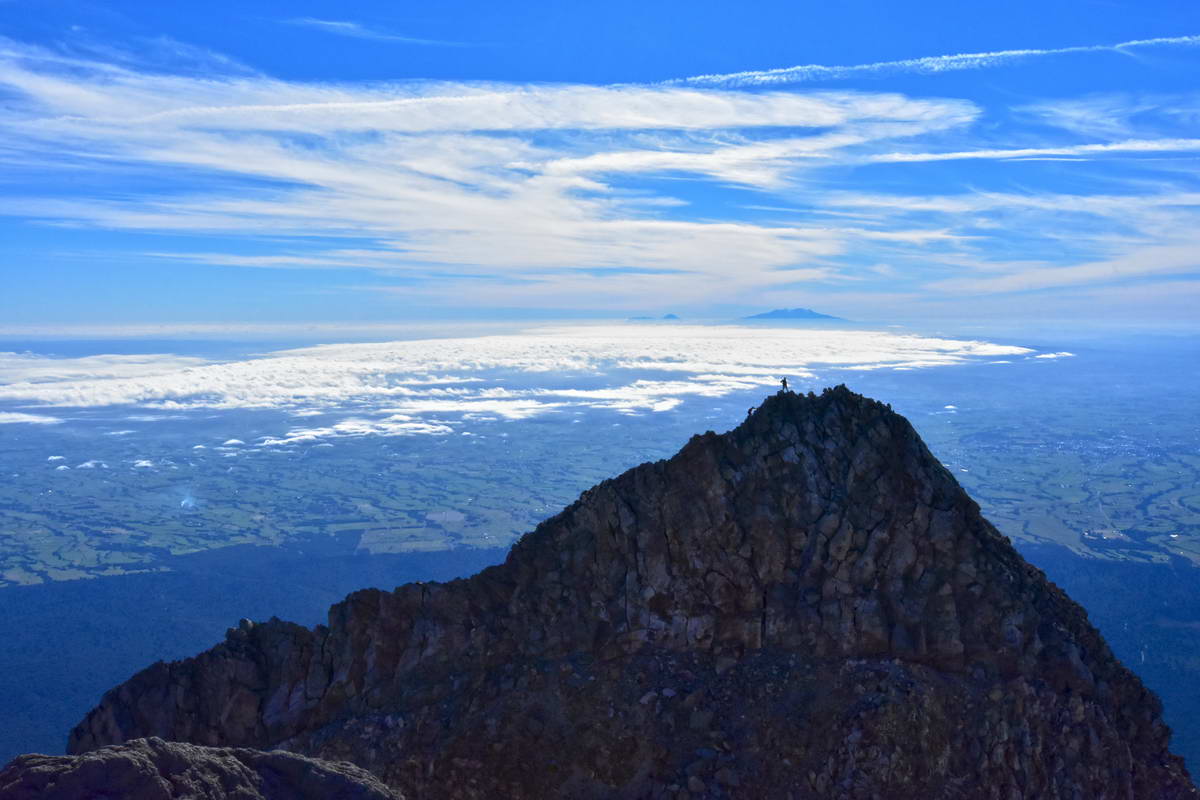 Sharkstooth with Ruapehu on the horizon

After taking a few photos we set off from the summit around 9:45 descending down the lizard and scoria to get to Tahurangi lodge soon after 11:15 and then returned to the Plateau by the round the mountain track getting back at around 12:20. The cloud suddenly rolled in while we were on our way to the plateau, one minute clear and the next the summit disappeared in a thick blanket of cloud. Just as well we made an early start.