One of my favourite climbs on Taranaki is to do a sunset climb around the time of a full moon. Not only do you get to watch the sunset and moonrise from the top of the mountain but also descend under the light of the full moon with the city and town lights spread out across the Taranaki ring plain below you.  The trick of course is to get a clear night as all too often banks of cloud build up during the day.

Anyway, last weekend the weather cleared up and looked like perfect conditions so I packed my pack full of camera gear, squeezed in a bit of food and warm clothing and set off for the mountain mid afternoon arriving at the north egmont carpark about 4:15.  I wanted to stay away from the scoria so headed up the old summit track and took the khyber pass route up past humphries castle.

The sky was very clear with great views out over the Pouakais and out to the coast though there was a strong cold southerly wind blowing. By the time I got up to Humphries castle i had to stop and put on another layer of clothing and of course take a few photos. 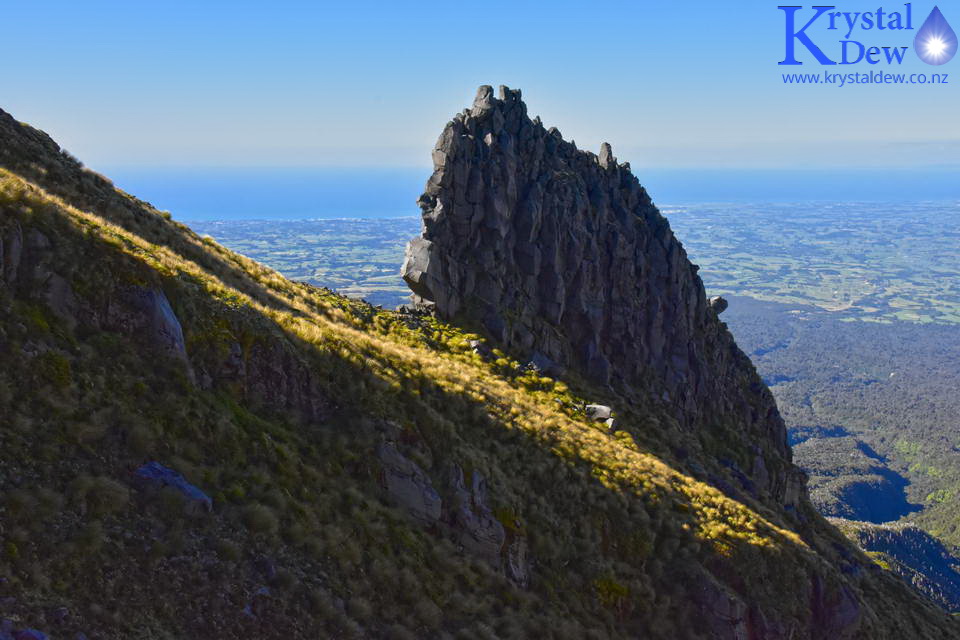 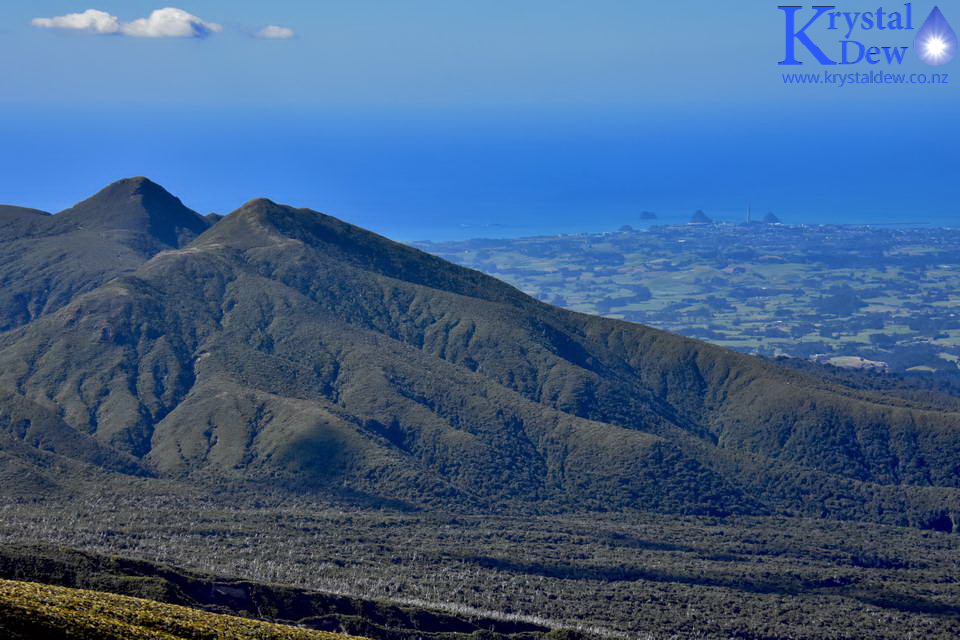 The Northern end of the Pouakai ranges (Maude and Henry peaks) with Paritutu and the Sugarloaf Islands in the background. 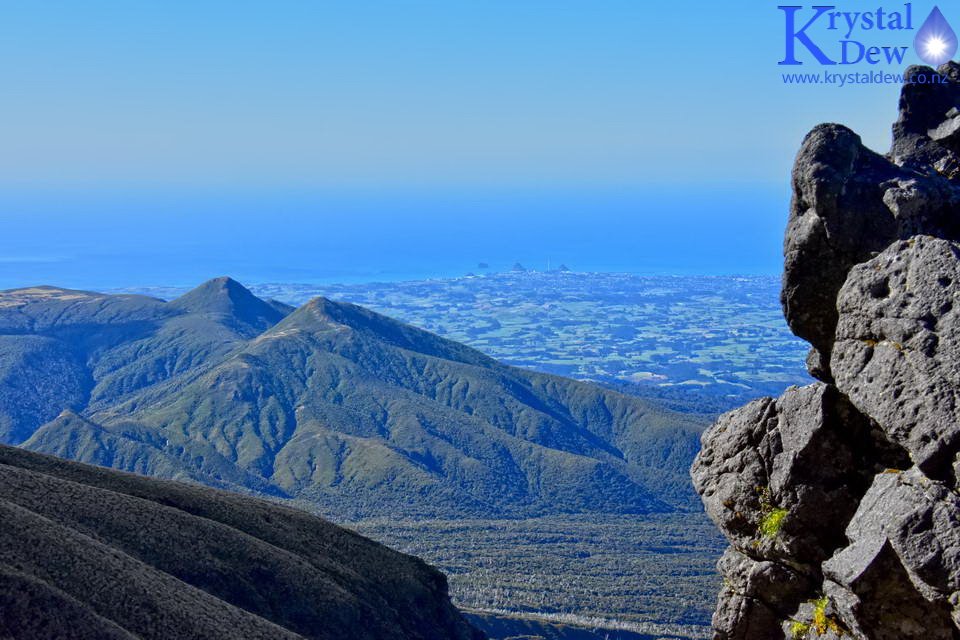 I descended down the ridge towards Humphries castle to get this shot.

One of the advantages of getting off the beaten track is seeing some of the pristine mosss slopes and the abundance of wild flowers.  The alpine daisies were particularly stunning with large clumps of them in flower. 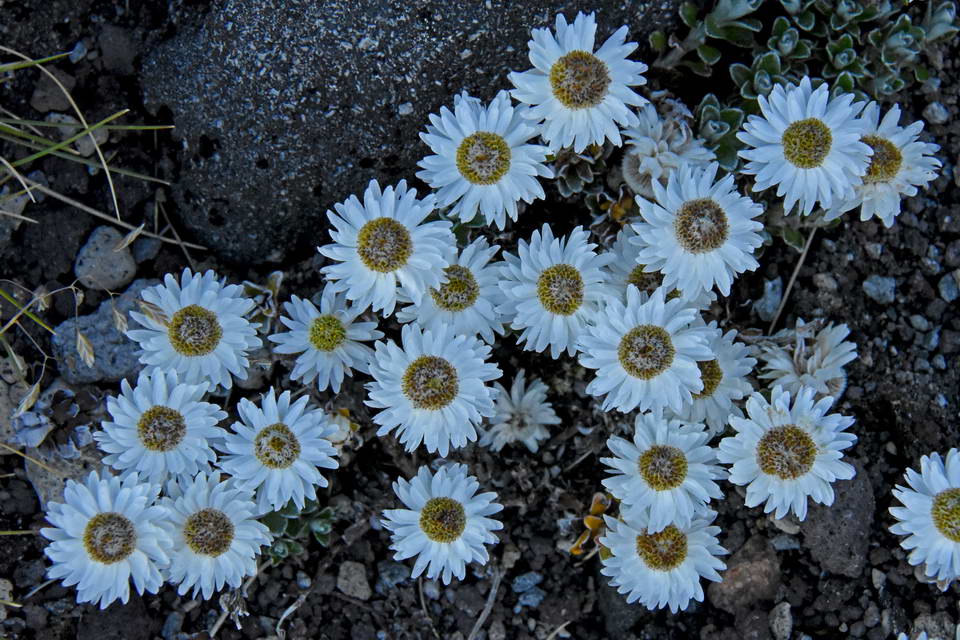 A clump of alpine daisies in the sub alpine zone.  These plants are incredibly hardy and can be found near the top of the lizard at 2000m.

The views out over the Pouakais in the evening light were stunning.  With the sun getting low, Taranakis shadow was also starting to stretch out to the east. 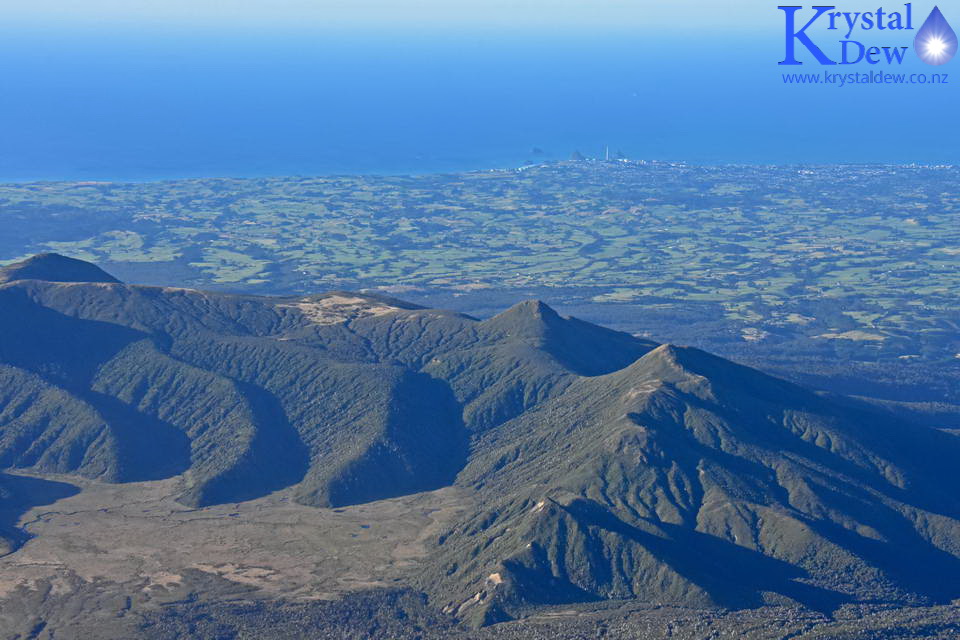 Looking down over the swamp (Ahukawakawa) and the Pouakais from near the top of the lizard. 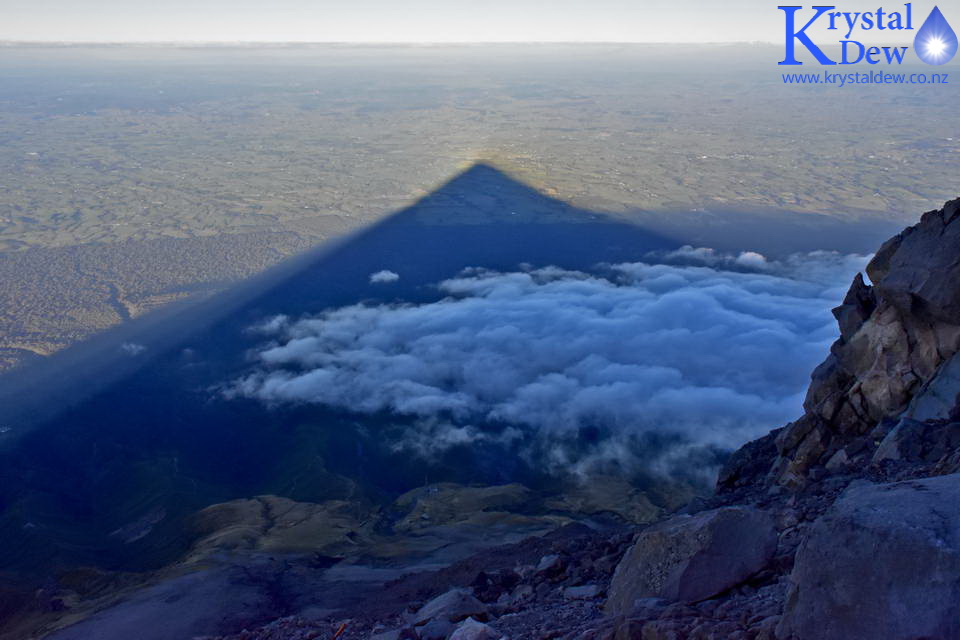 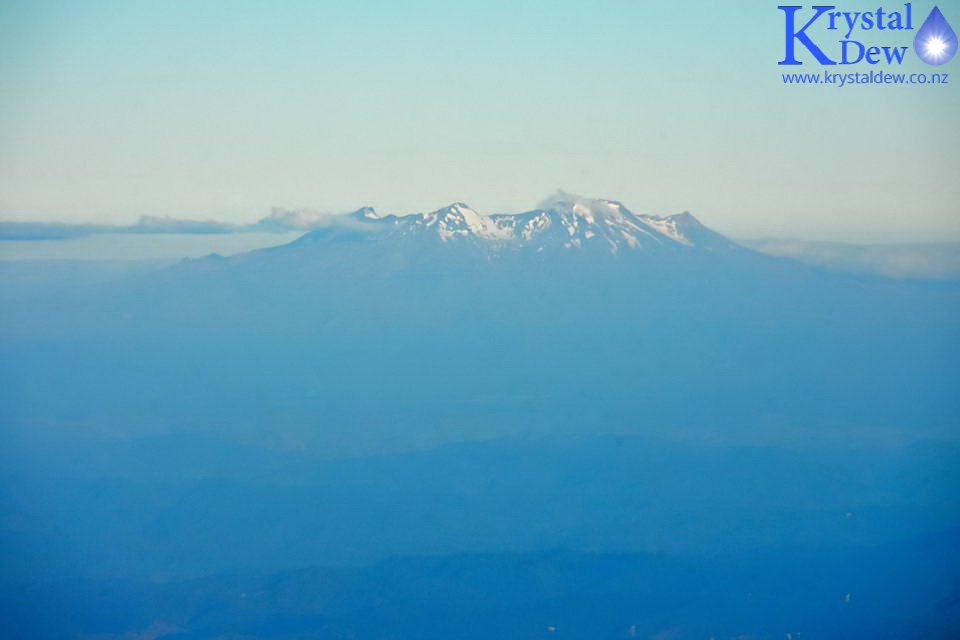 Ruapehu, standing out above the summer haze on the horizon.

By the time I got to the summit I had all my warm clothing on including my rain coat as a wind break.  The wind was bitterly cold and my fingers were soon getting numb as I took photos.  I had gloves but it it's much easier using the camera without gloves on.

It was a beautiful clear evening and as the sun went down in the west the shadow of Taranaki grew tall in the east. 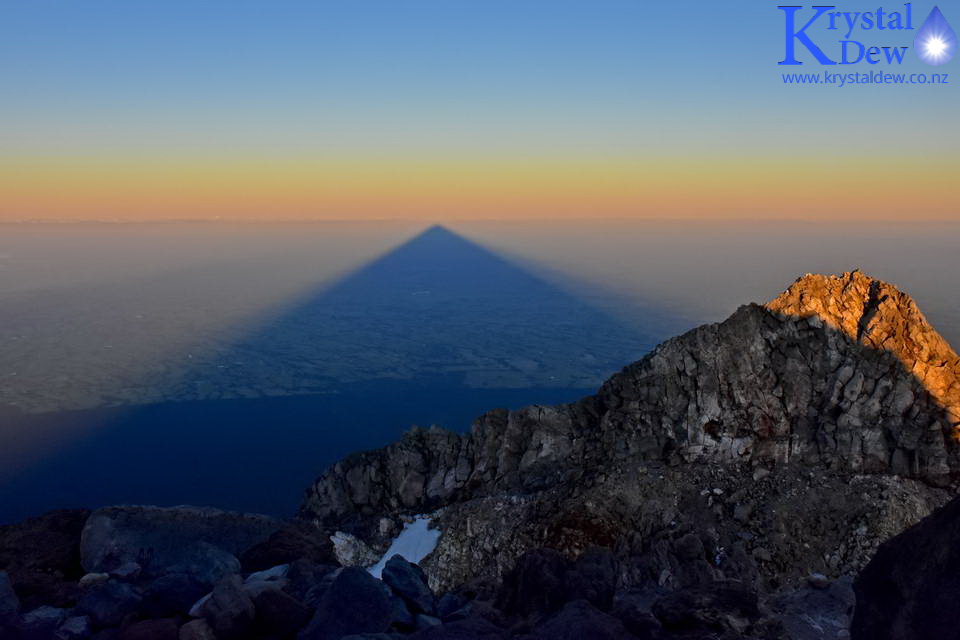 Taranakis shadow stretching out to the horizon with sharkstooth to the right. 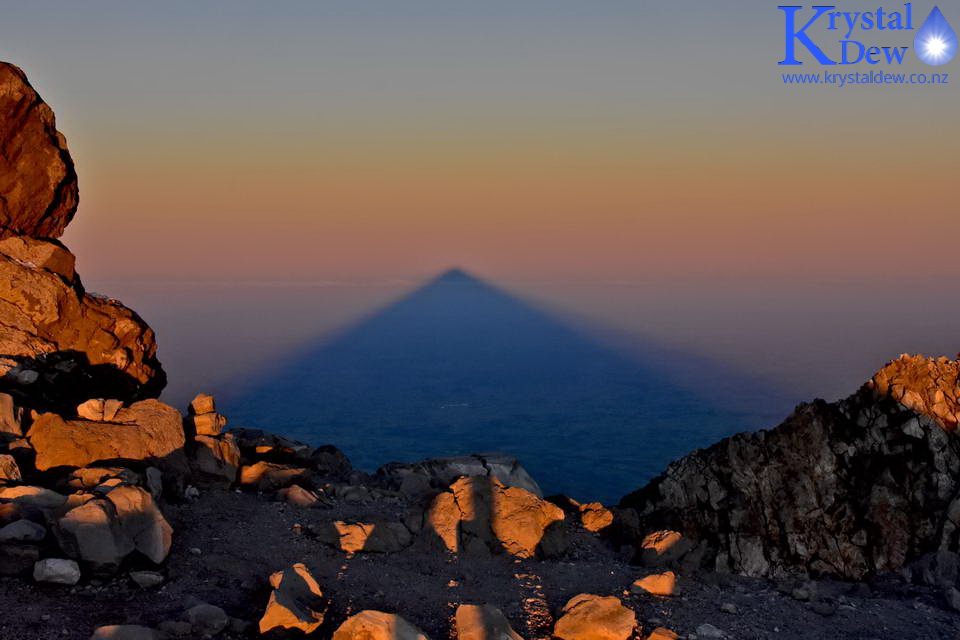 The shadow - right on sunset 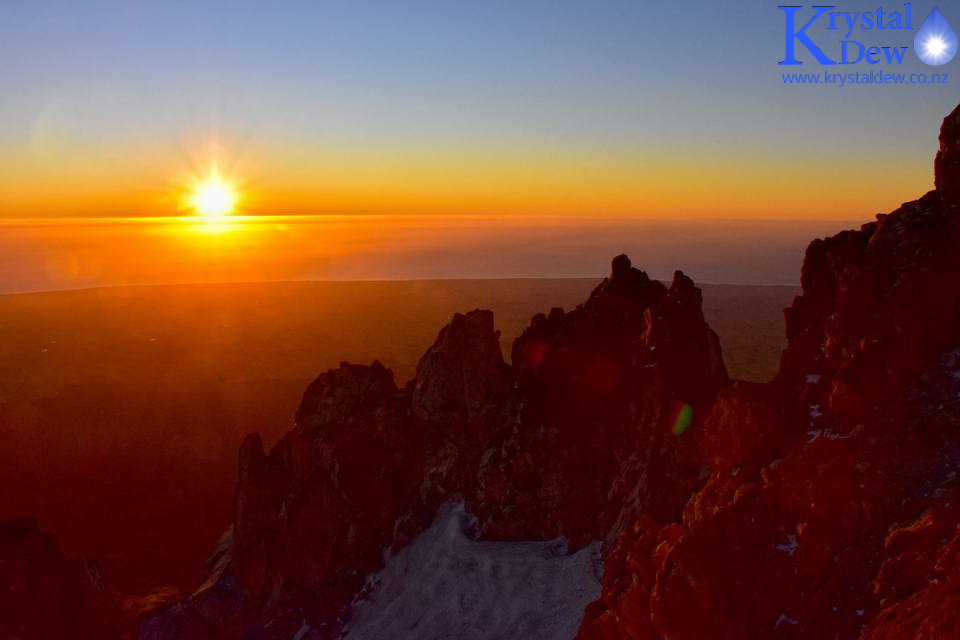 Sunset and the seven sisters ridge at the southern end of the summit . 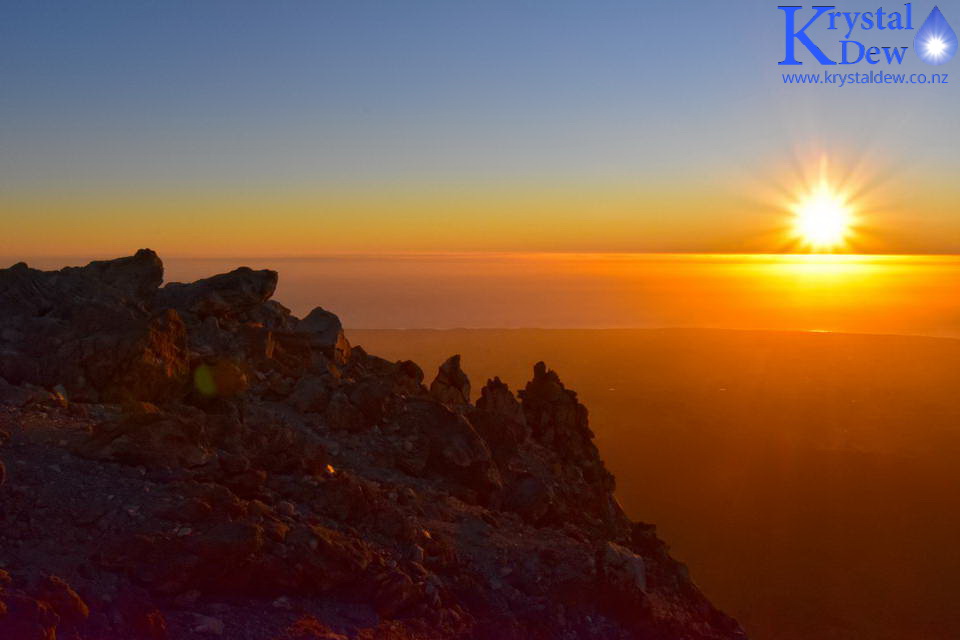 This shot is taken from summit rock looking south west. 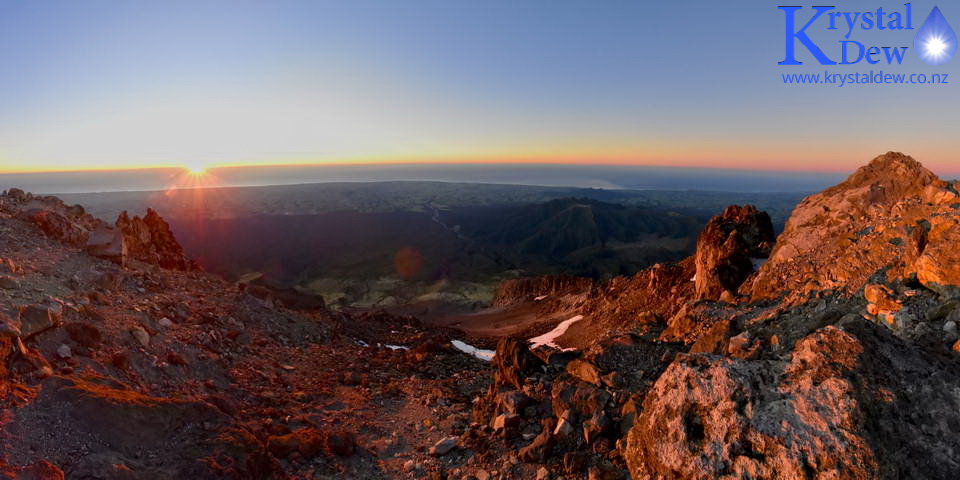 A sunset panorama - summit rock to the right - this is about a 180deg span. 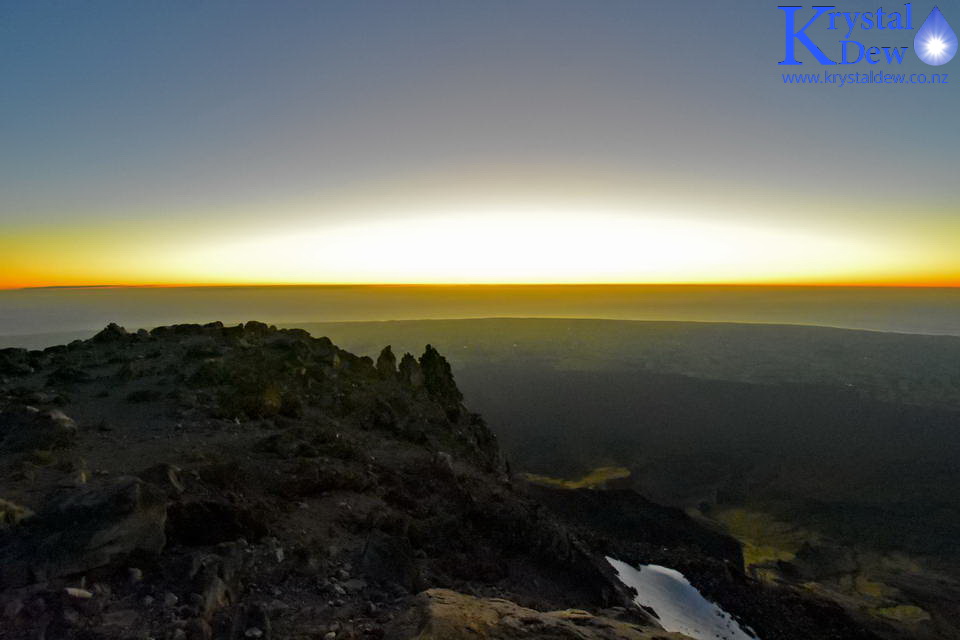 And then the sun was gone leaving an afterglow on the horizon out to sea. 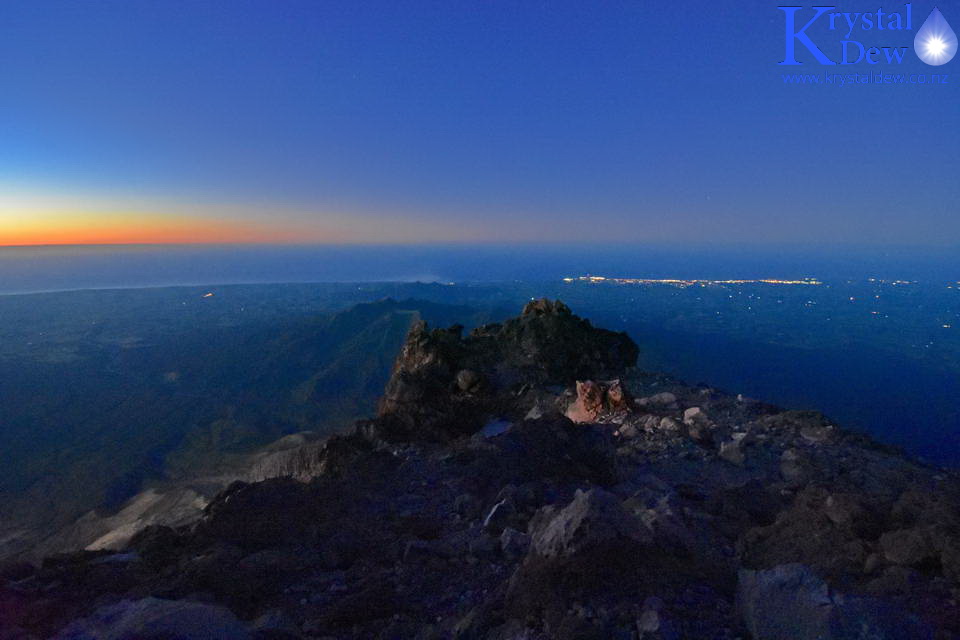 As dusk set in the city lights started to show up along the coast. 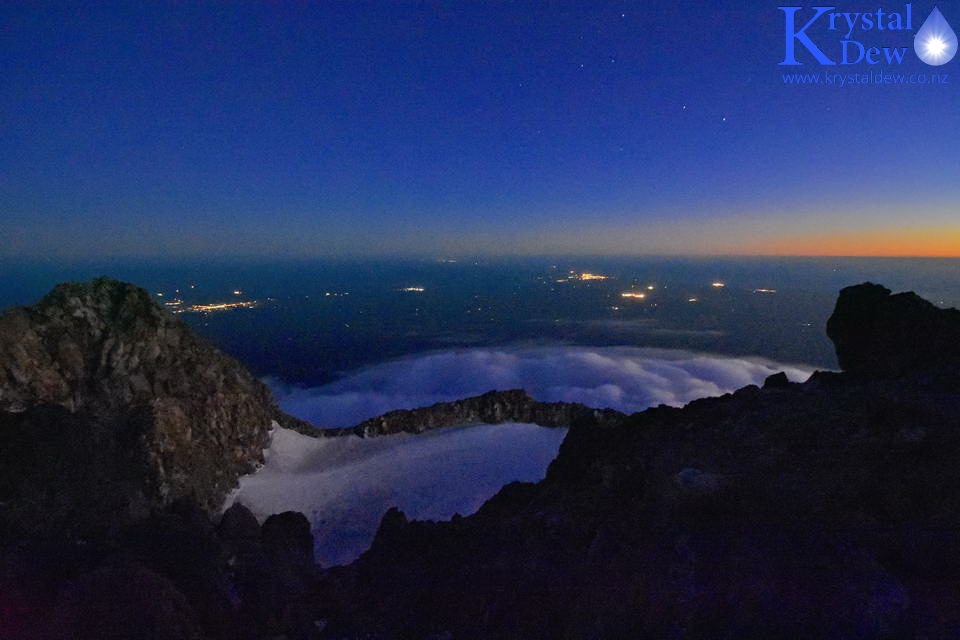 This is the view over South Taranaki. The Stratford lights are to the left just behind sharkstooth, then Eltham and Hawera on the coast. You can just make out the southern cross directly above the Hawera town lights. 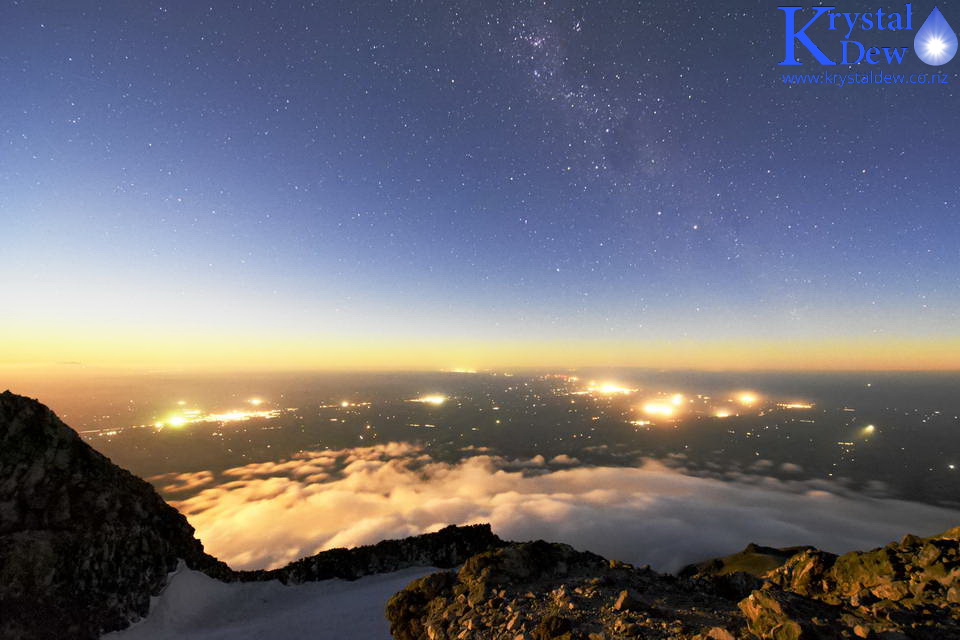 South Taranaki again with the milky way becoming visible. The glow to the left is from the moon rising.

I had a bit of a melt down with my camera just as the moon was rising.  I always put my camera in to full manual mode for these night time shots and manually control the shutter open and closing using a remote control. Somehow I accidently shifted one of the controls and unkowingly put the shutter on 60 second exposure just as the moon was rising so I missed that crucial moment but fortunately figured out what had happened just before throwing the camera into the crater in frustration.

Anyway - I recovered in time to get these shots of the moon rising over New Plymouth. 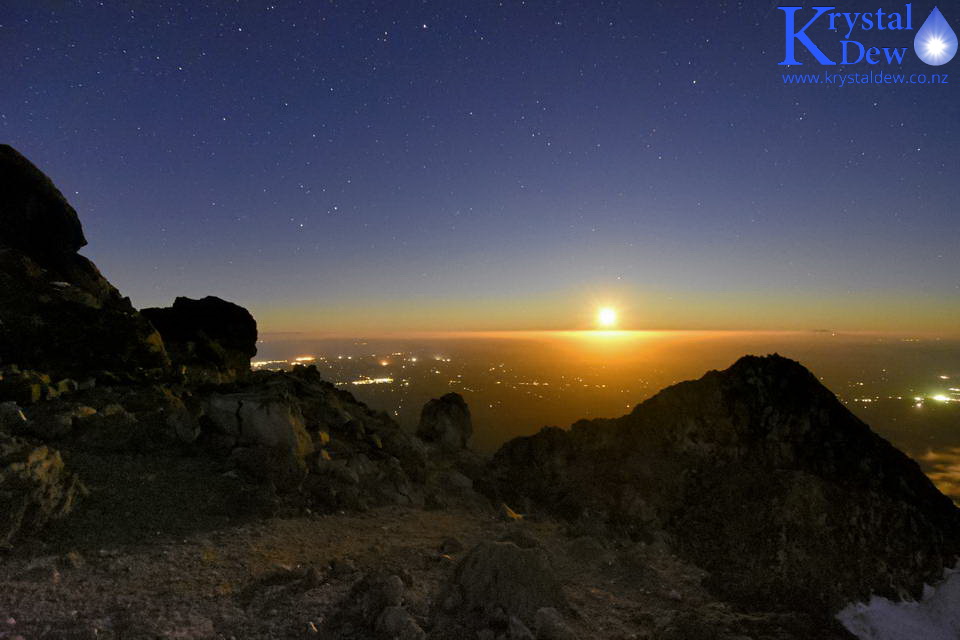 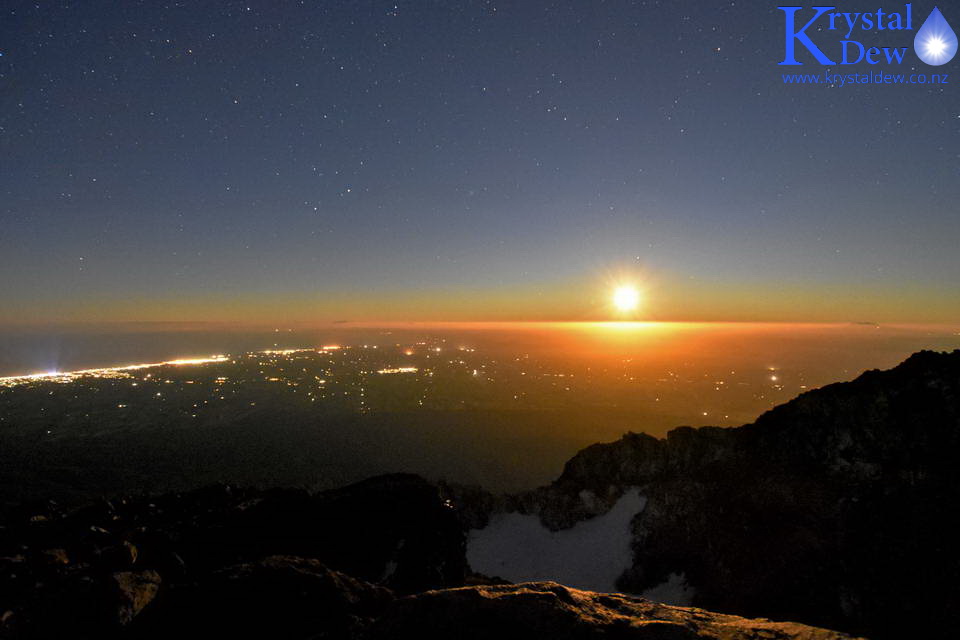 Miraculously the wind completely dropped quite suddenly as the moon rose and it went from being bitterly cold with the wind chill to a calm pleasant evening on the summit. It was absolutely beautiful standing on the summit with the moon rising, the city lights below and the night sky spread out above. 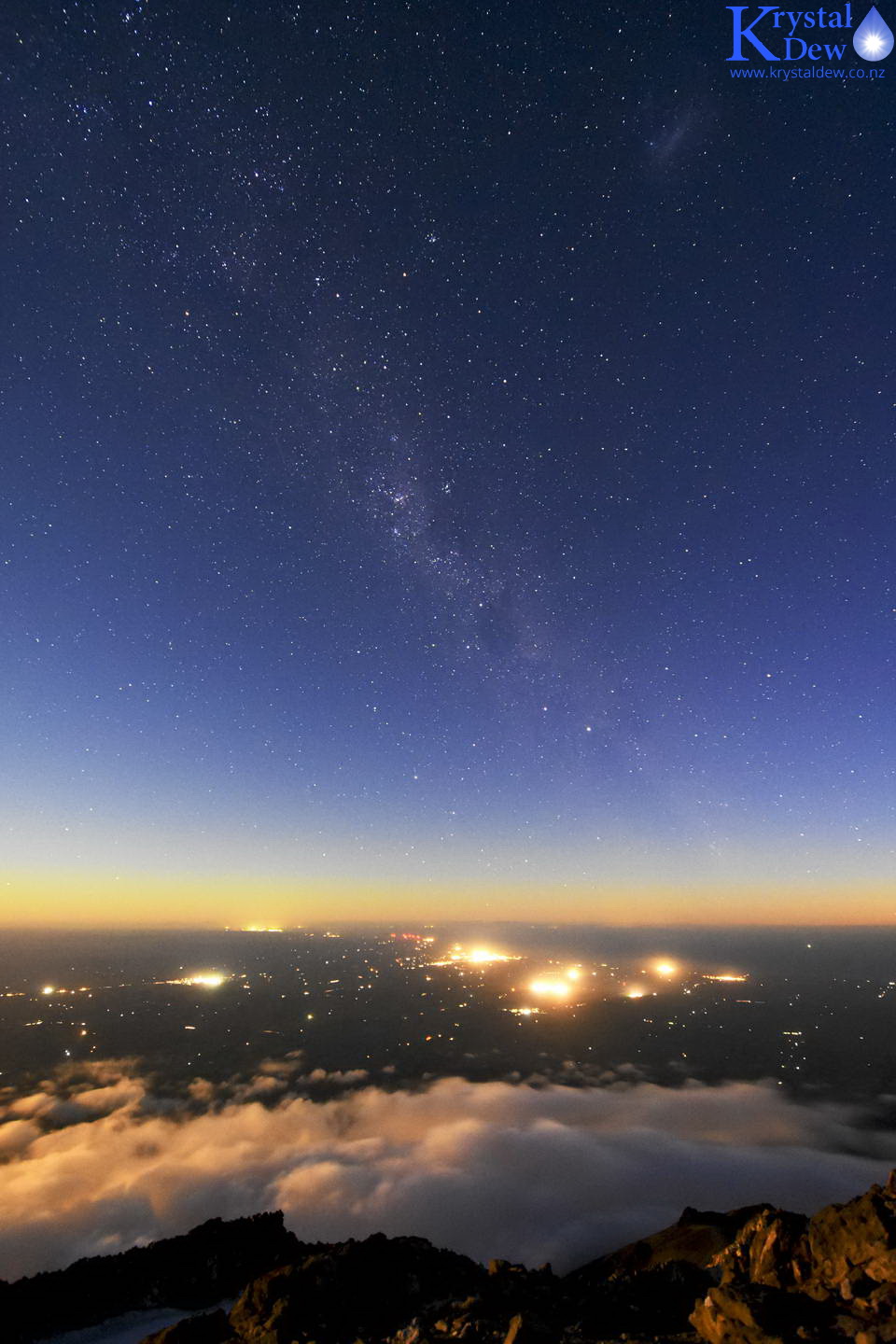 The milkyway rising above the south Taranaki towns.

By the time I had stopped taking photos it was 10:30pm and time to head down. The descent off the summit was still in shadow as the moon was quite low so I had to use my head lamp until I was down on to the top of the lizard but from there on the light from the moon was so bright that I could turn my headlamp of and make my way down by the light of the moon.  Descending at night like this under a full moon is just a magic experience.  WIth the wind gone I rapidly got too hot and had to shed my layers of cloths as I descended so that by the time I was down onto the translator road I was once more in shorts and tee shirt as I'd first started off.

I finally got back to the car about 1:15am. This was one of the best night climbs I've ever done.