I hadn't done a sunrise climb for a few years so decided it was about time to experience the dawn from the summit if Taranaki Maugna again. I prefer to climb under a full moon when I'm doing a sunrise climb. For about a week after the full moon the moonlight is strong enough to climb by the moonlight without needing a torch.  Saturday morning was 5 days after the full moon and a perfectly clear night so I set off from home around 1:40am and arrived at the North Egmont visitors center around 2:10am. I was surprised how crowded the car park was as it was quite full whereas normally when I turn up for a night climb it's quite empty.

I set off up the translator rd under an incredibly clear night sky. As I cleared the bushline I could see torch lights from multiple groups above me. I passed a couple of rops at Tahurangi lodge and a couple more in Hongis valley and at the base of the scoria where I stopped for a 5 minute break. The conditions were superb. A clear warm night with perfect visibility. I only used my torch briefly to negotiate through the shadows in Hongis valley.

I made good time up throug hte scoria and onto the lizard which id=s always my favourite part of the climb. I passed a nother couple of groups near the top of the lizard before reaching the summit entrance and making the final climb onto the summit which I reached around 5:40am in plenty of time to get some good predawn photos.  I soon as i reached the summit I put on all my warm clothing as from experience I know that you cool down pretty fast when you stop climbing and are exposed to the cool breeze from the summit.  There was already al large group of people on the summit when I arrived and more kept turning up so that there was probabaly 25 to 30 people waiting fo rthe sun to rise when it eventually cleared the horizon at around 6:20.

It was a beautiful sunrise. There was very little cloud in any direction which is unusual. It's a long time tsince I had been on the summit with so little cloud. The air however was very hazy, probabaly full of dust from the Tonga eruption.

I spent about an hour and a half on the summit watching the sunrise and managed to take a couple of hundred photos in this time. Here's a small selection. 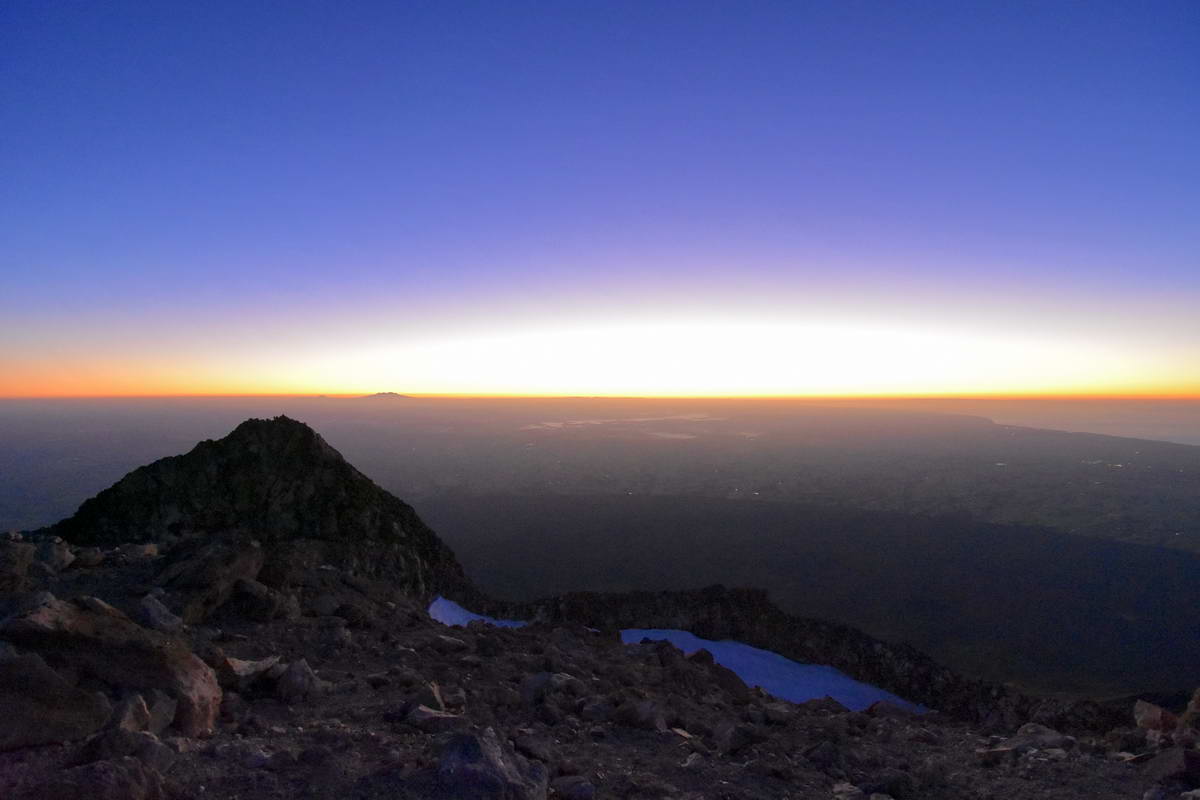 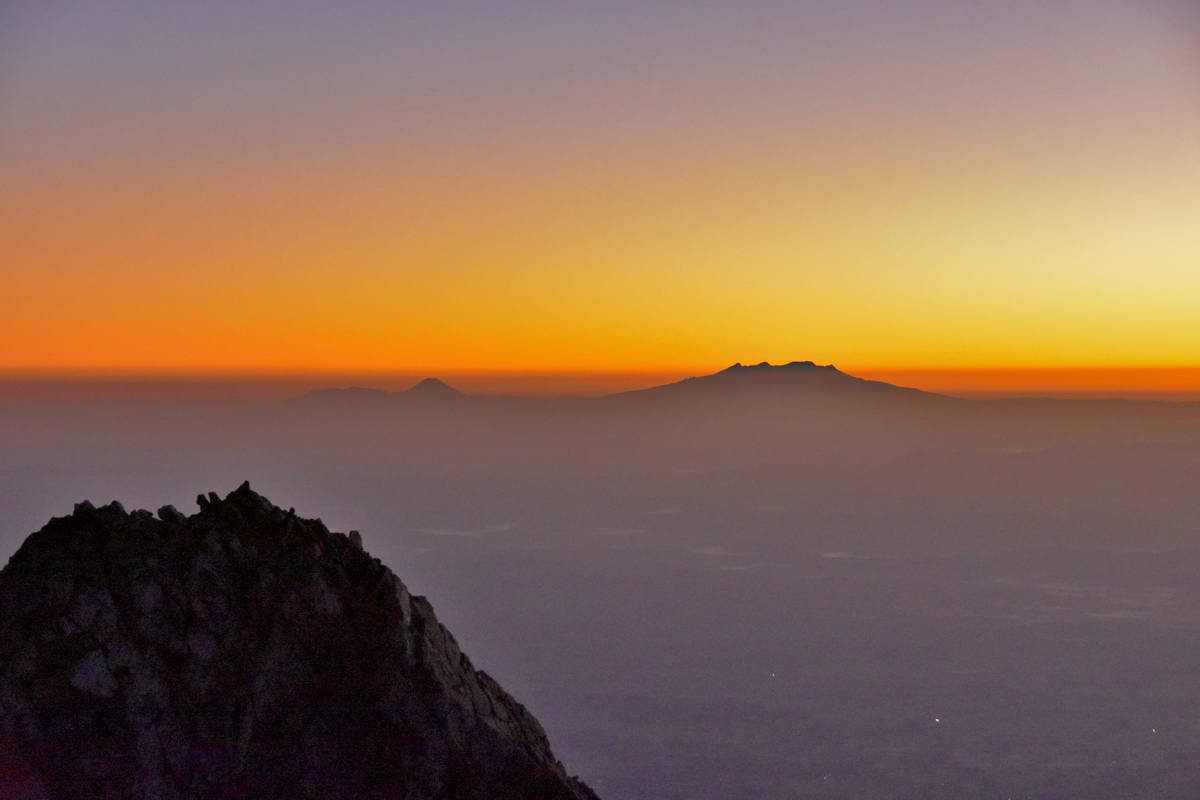 Ruapehu, Ngauruhoe and Tongariro with sharkstooth in the foreground 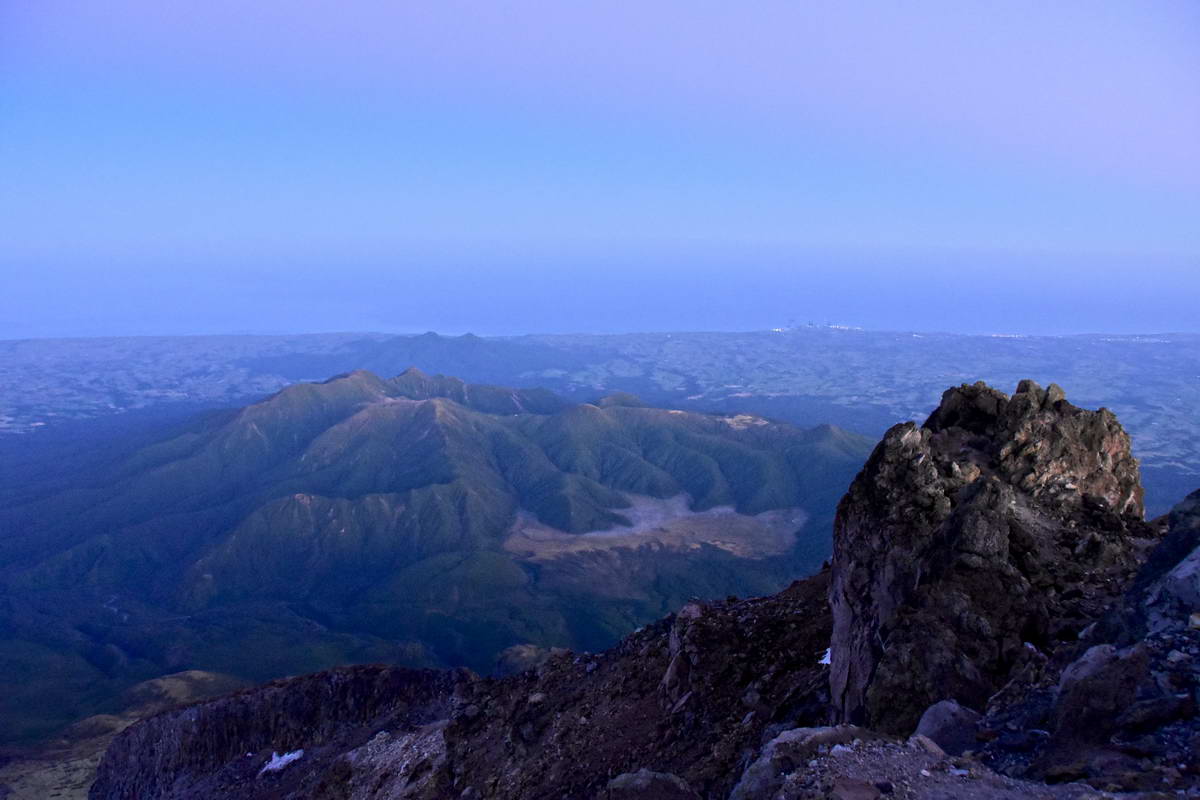 The Pouakais with the Kaitakes in the background . The top of Heberly ridge in the foreground. Taken about 30 minutes before sunrise.

Looking north along the coast with sharkstooth on the right and Ruapehu on the horizon.

A 180deg panorama spanning form the north to south coasts of Taranaki. 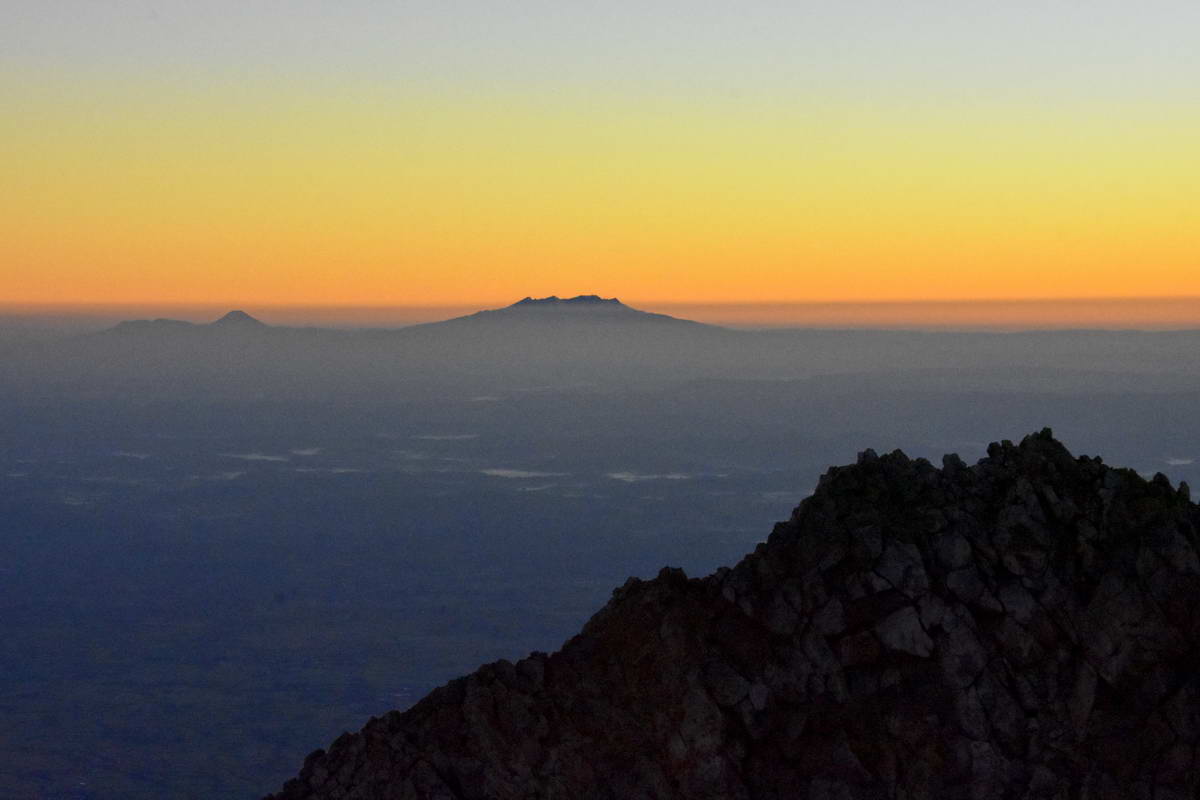 Ruapehu, Ngauruhoe and Tongariro with sharkstooth in the foreground. 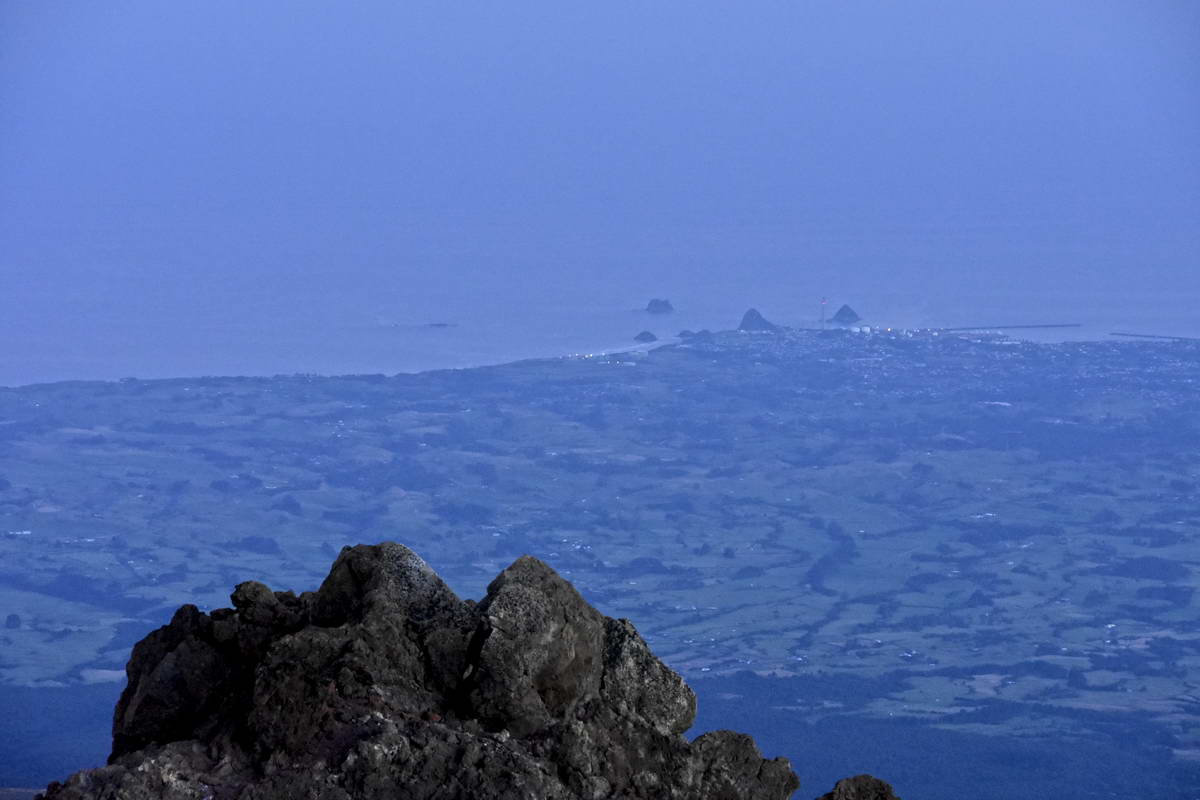 Paritut and the Sugarloaf islands with the top of Heberly ridge in the foreground. 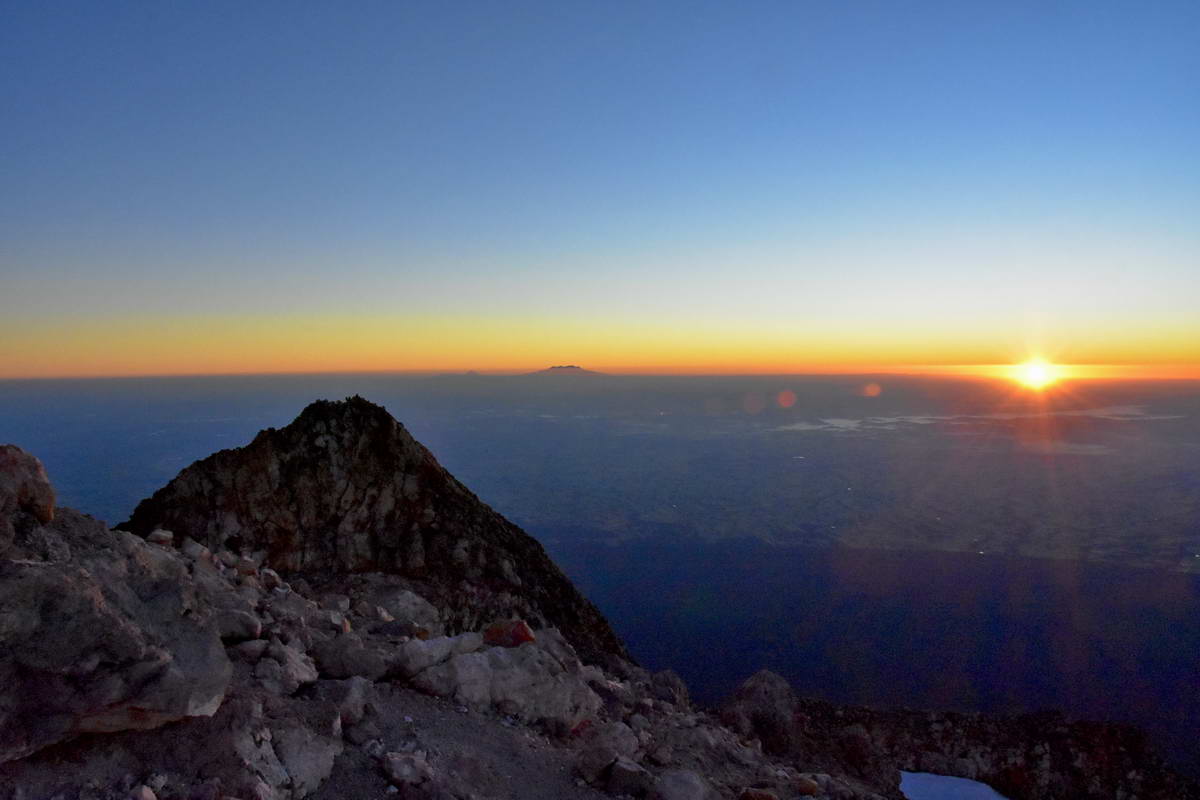 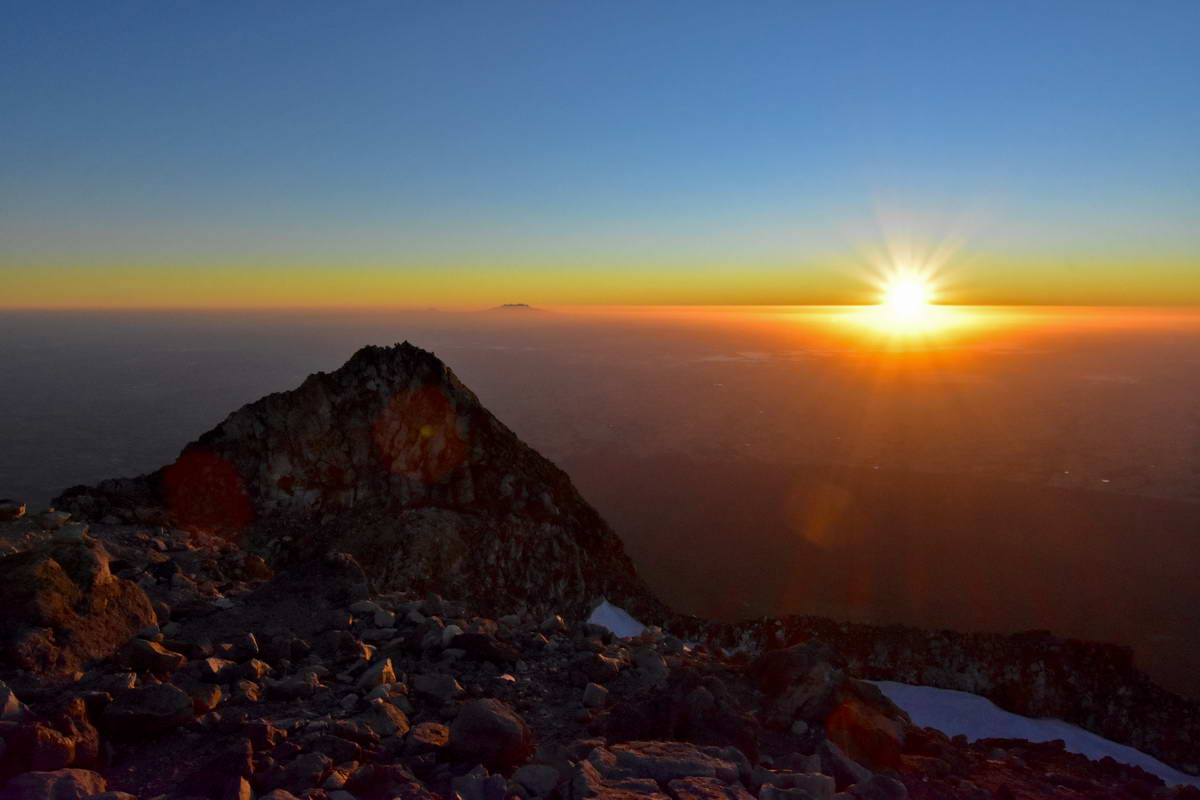 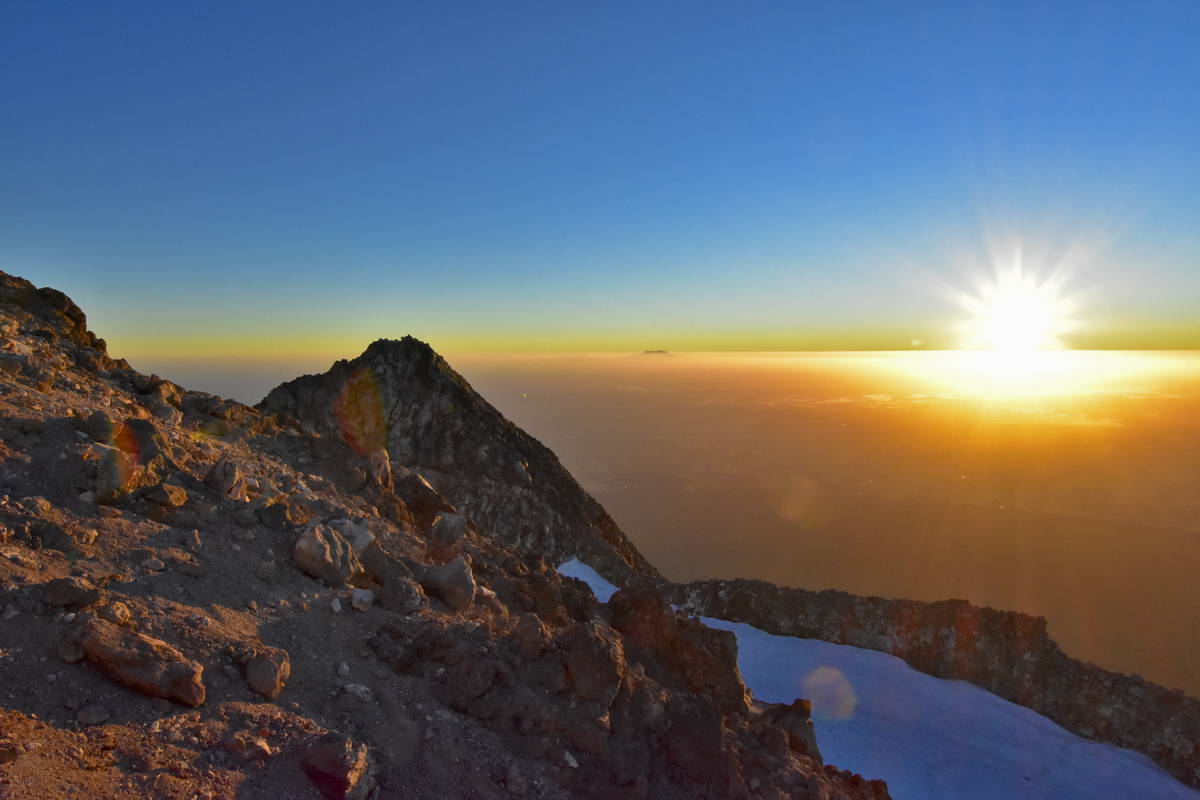 The sun just clearing the horizon taken from part way off the southern end of the summit. 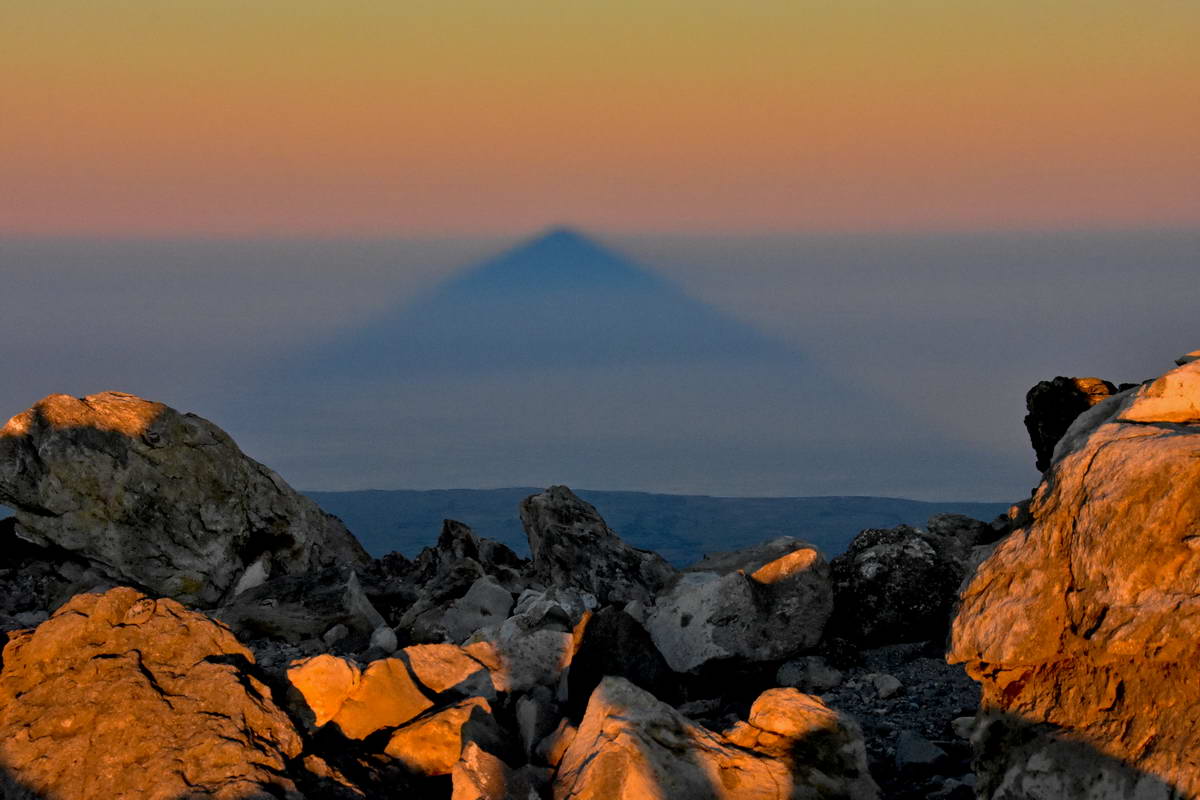 The dawn shadow of Taranaki Maunga 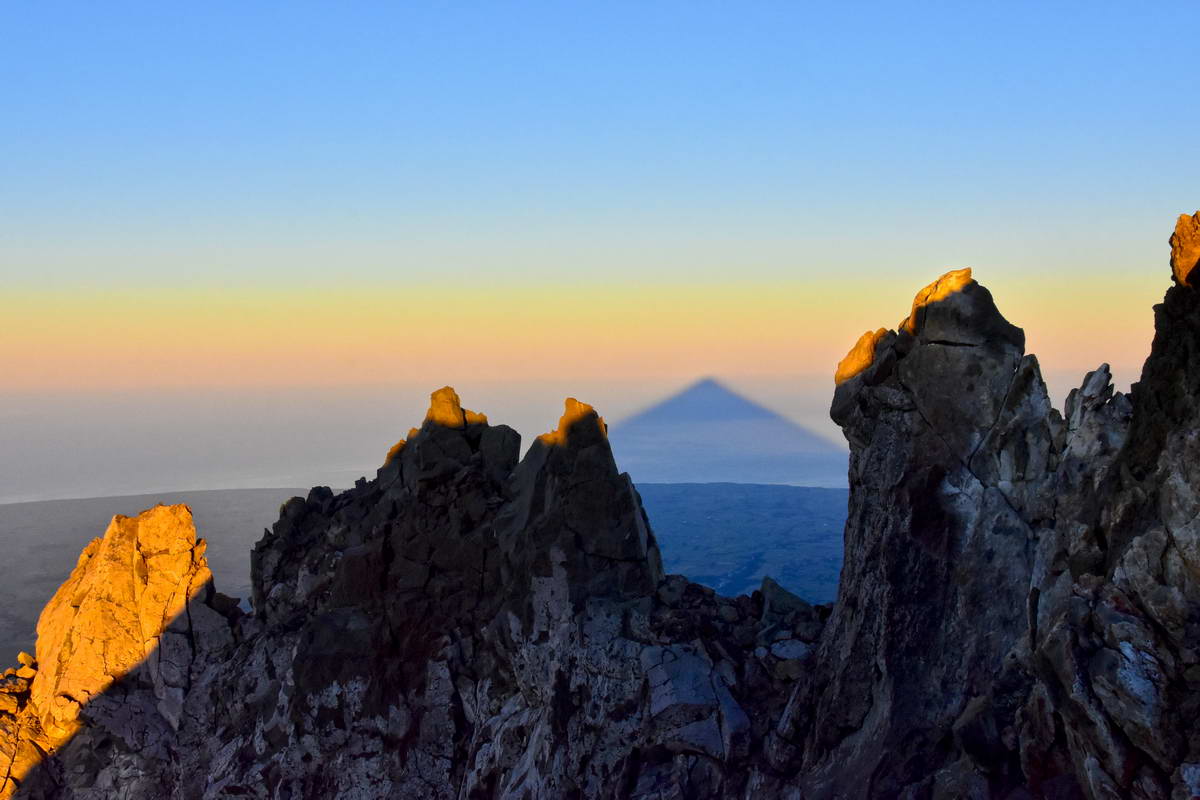 Viewing the shadow through the seven sisters ant the southern end of the summit. 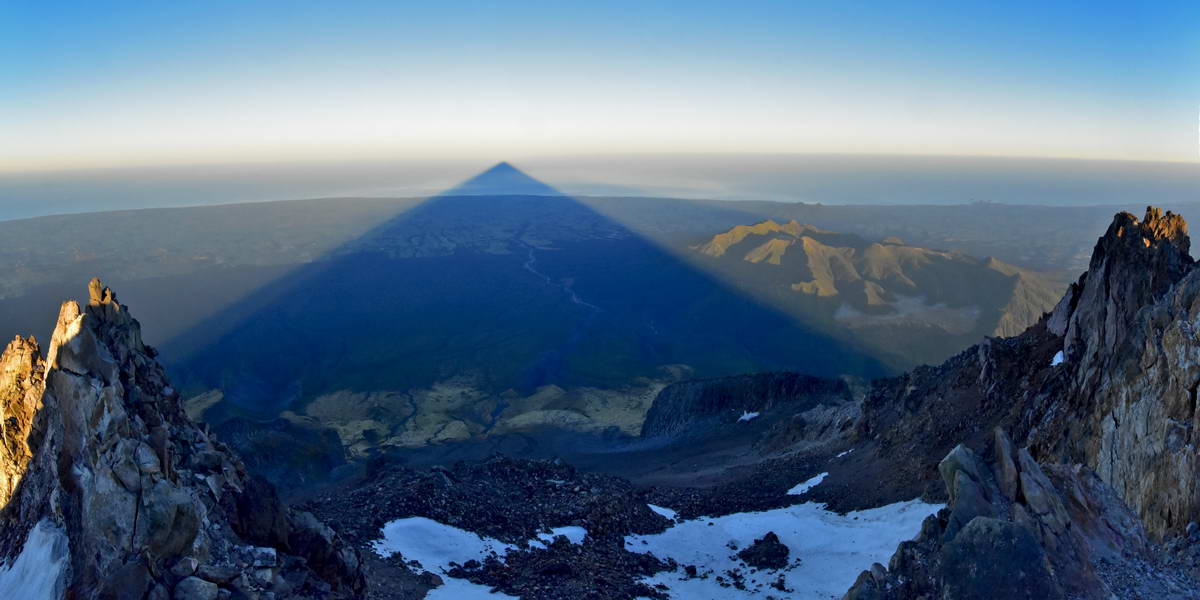 Shadow of the Maunga cast over western Taranaki with the Pouakais to the right. Heberly ridge in the foregound and below that the turtle. The seven sisters to the left 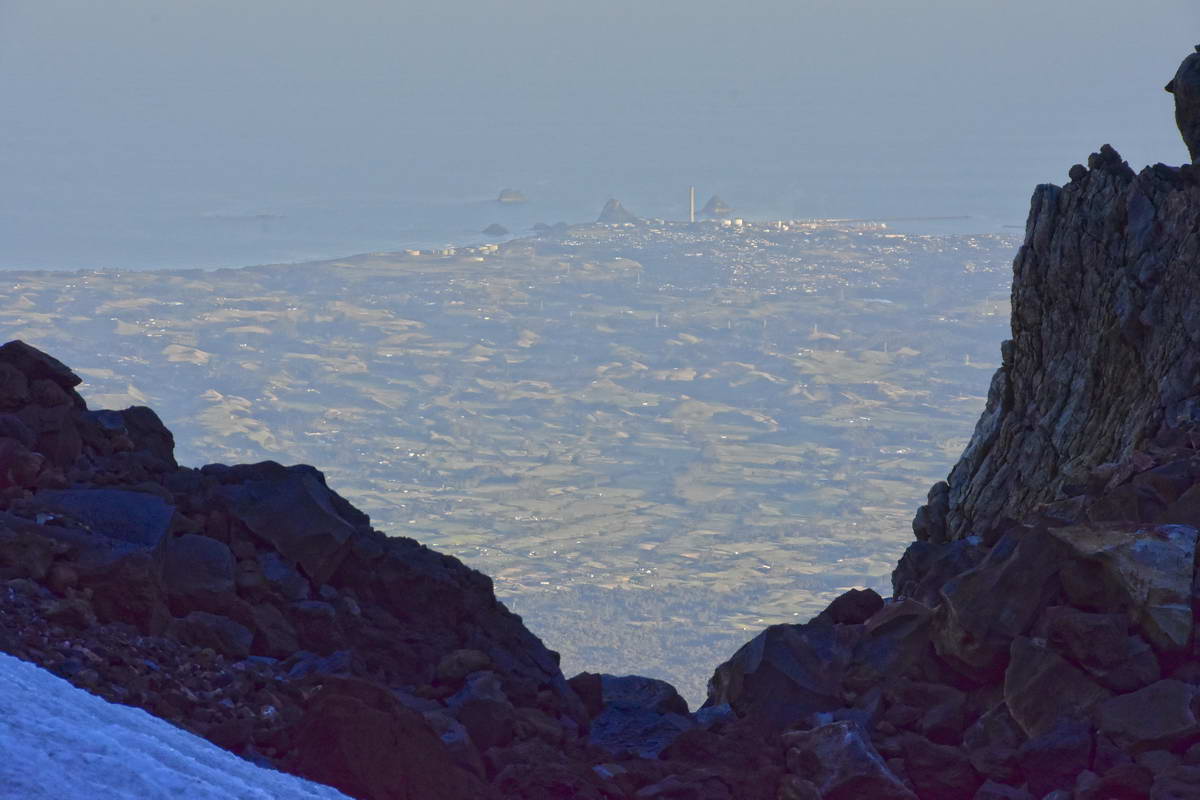 Paritutu, the Sugarloafs and the port viewed through the crater. 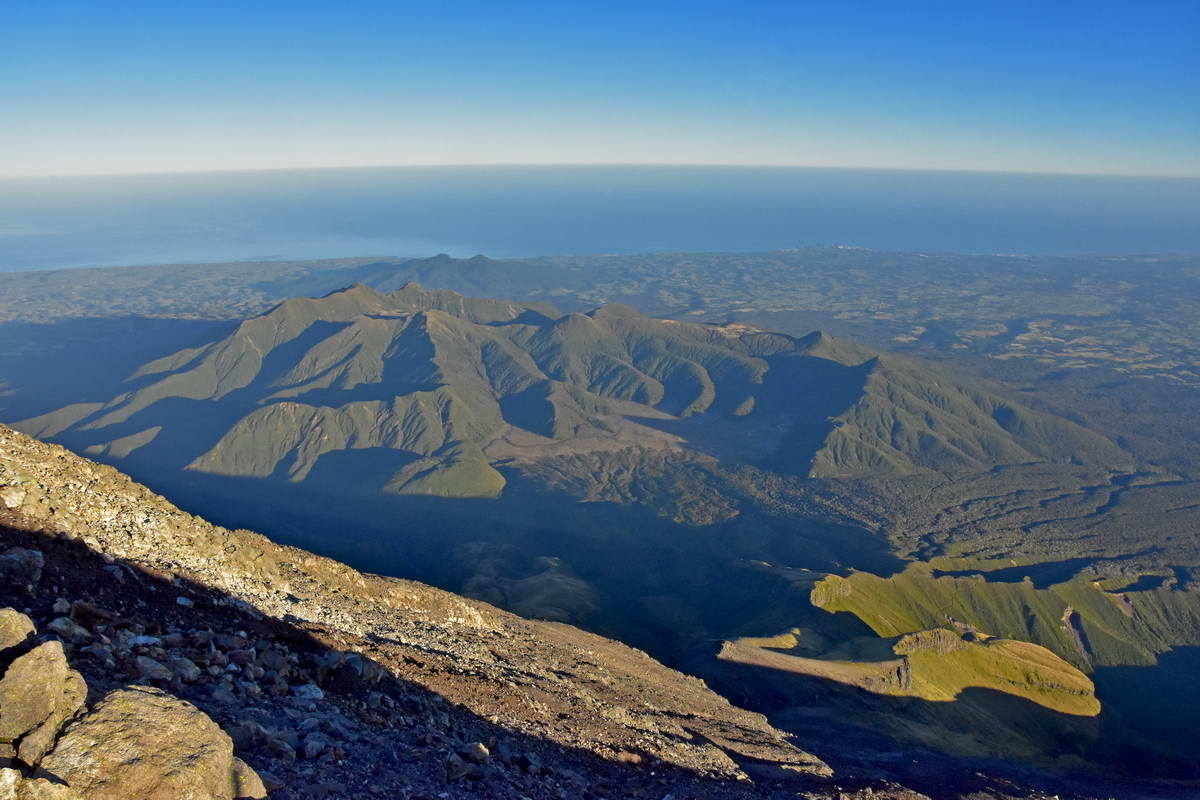 The Pouakais lit up clearly by the morning sun.