Every spring I look forward to getting in a few good snow climbs on Taranaki. This year the snow seems to be melting off much faster with a much lower snow base than past years. I've been wanting to make a climb for a few weeks but the weather or other events have always got in the way.  I was also a bit nervous about my fitness as I haven't been doing any tramping recently.

On Saturday morning the mountian was clear though there was a bit of cloud around. I decided this was my opportunity so got my gear ready and set off. I got to the North Egmont carpark at 8:00am with the temperature at 2degC and a heavy ground frost. Off I went with my breath misting in the cold morning air though I soon warmed up as I made my way up the translater road. It took me about an hour to get to Tahurangi lodge. I could see that there was still snow banked up against the cliffs in Hongis valley so crossed Hongis on the round the mountain track and took the old summit route up through the moss slopes - otherways known as the staircase.  40 years ago this was the main route and the moss slopes of the staircase got utterly wrecked by the foot traffic  being turned into a scree slope. The summit track was then rerouted through Hongis valley and slowly over the last 40 years the moss slopes have recovered.  They have now recovered incredibly well and I was very careful as I made my way up to tread carefully trying not to cause any damage to the delicate plant life. 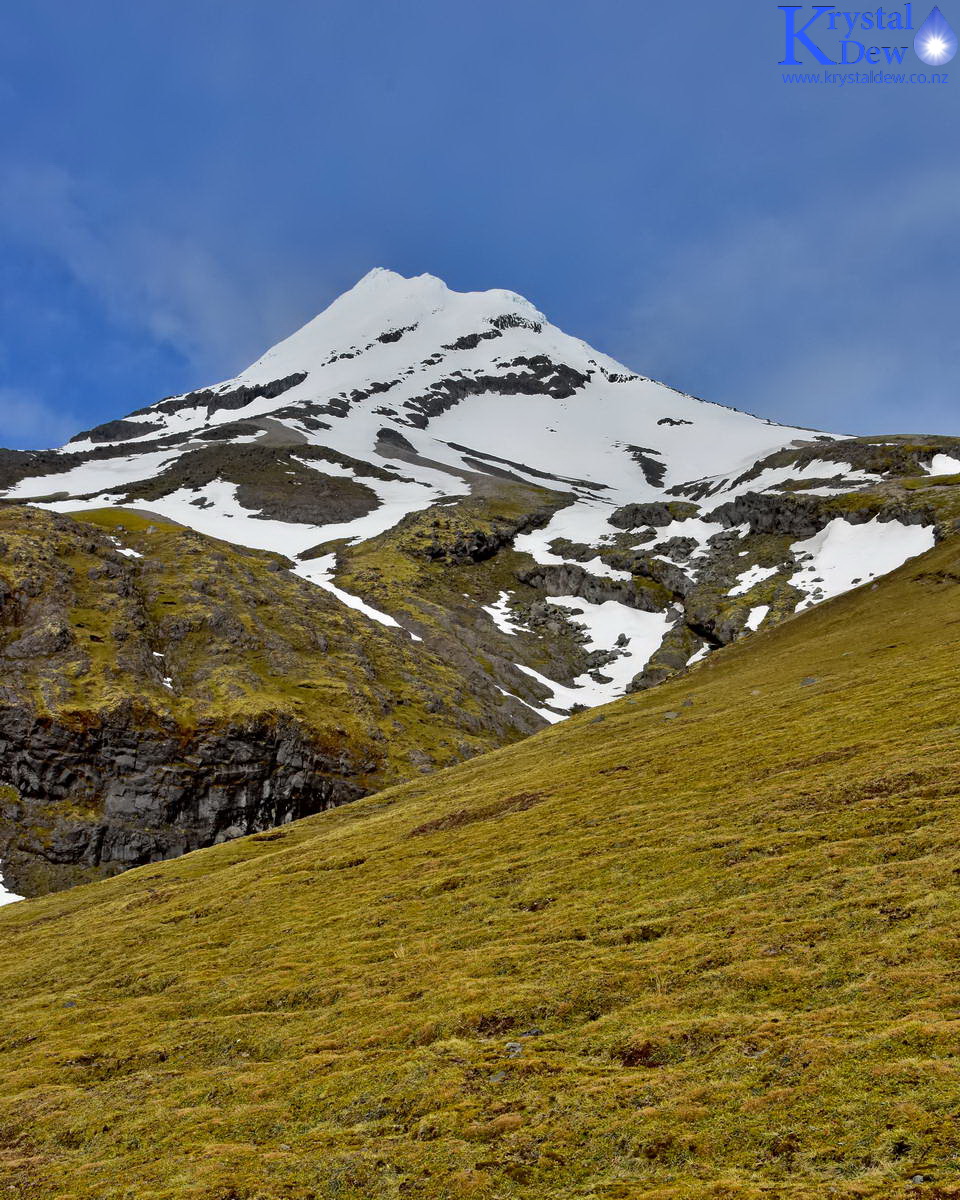 Looking up at the summit from the moss slopes of the stair case.

At the top of the first stair case I rejoined the main summit track briefly before reaching the bottom of snow valley where I donned my crampons and headed up through the snow. By the time I had put on my crampons the cloud had suddenly moved in and swirled around me blocking the view for most of the way up snow valley. The snow conditions were perfect and the day had warmed up. THere was barely a breath of wind as climbed up through snow valley however that changed as I approached the lizard when a bitterly cold southerly wind sprang up. As I stopped on the lizard to put on more warm cloths a snow squall developed and it nowed for about 10 minutes, however as I moved out and started the climb up crater valley, the wind dropped again, and though cloud swirled around it was often hot and sunny, though too much cloud for any views.

My lack of fitness really started to tell as I climbed up crater valley and I found it hard work making the final climb up into the crater. For the last hundred meters or so up crater valley the slope was covered in sastrugi ice crystals which were also completely covering the rocky outcrops bordering the crater and the summit peak itself.  It was incredibly beautiful especially when the sun cam out and the ice crystals glistened. I felt like a vandal walking through them and breaking them with each footstep.

I stopped to take a number of photos in the crater before heading up onto the summit. 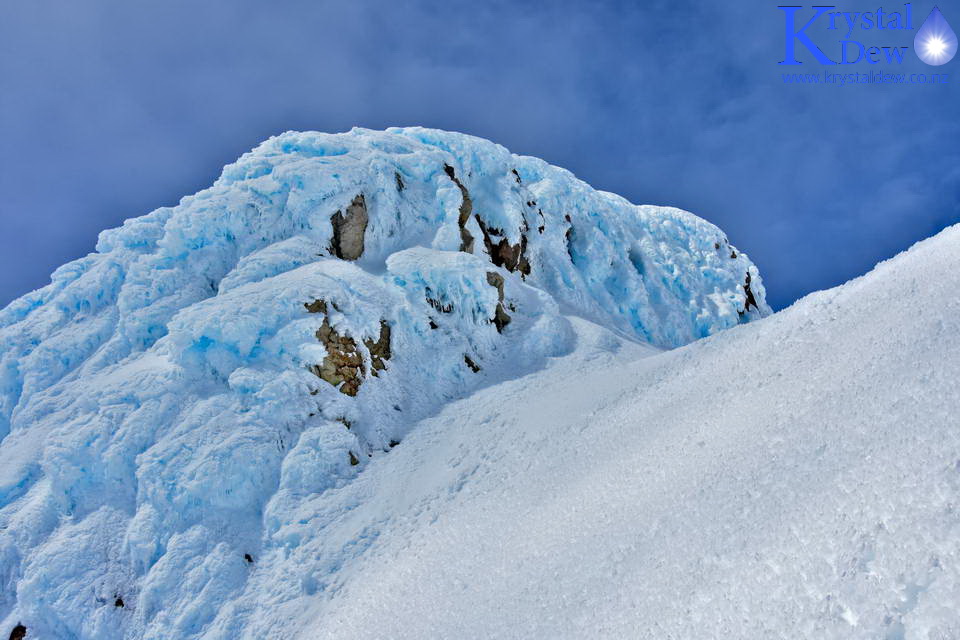 The crater entrance from the top of crater valley. 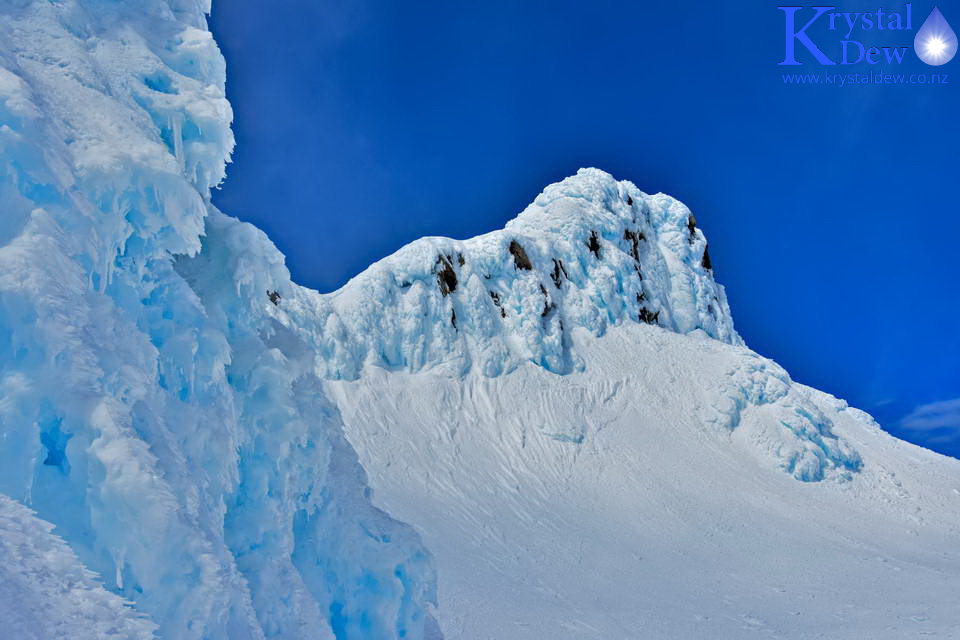 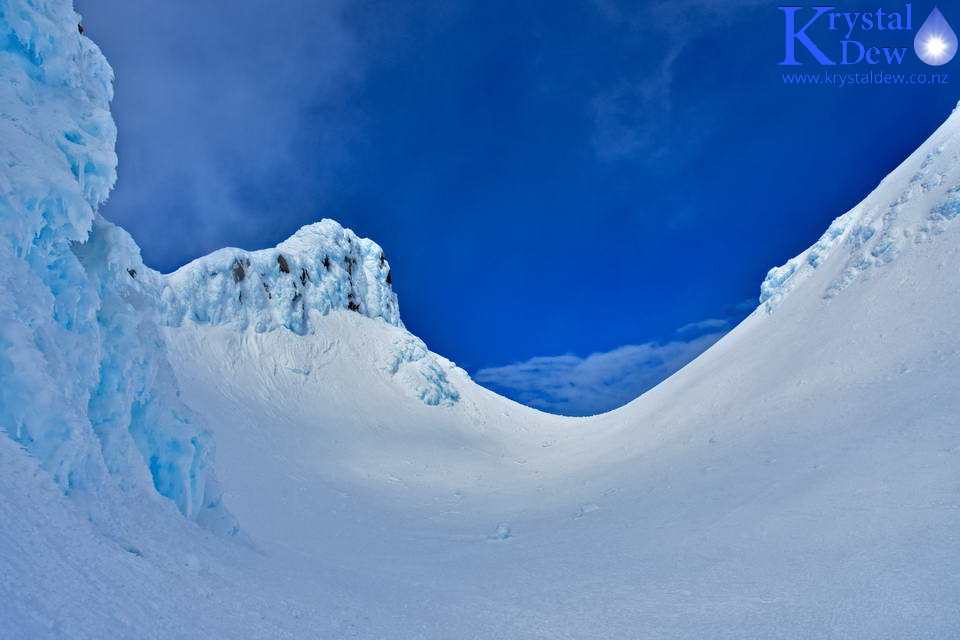 Looking up the crater towards sharkstooth with the summit peak on the right.

As I made my way up on to the summit the cloud closed in again giving only fleeting glipses of sharkstooth and the crater. Though the cloud was constantly swilring around, the summit itself remained in sunshine and was incredibly beautiful with its covering of ice crystals. The wind however wasn't so pleasant with a bitterly cold southerly whipping over the summit. 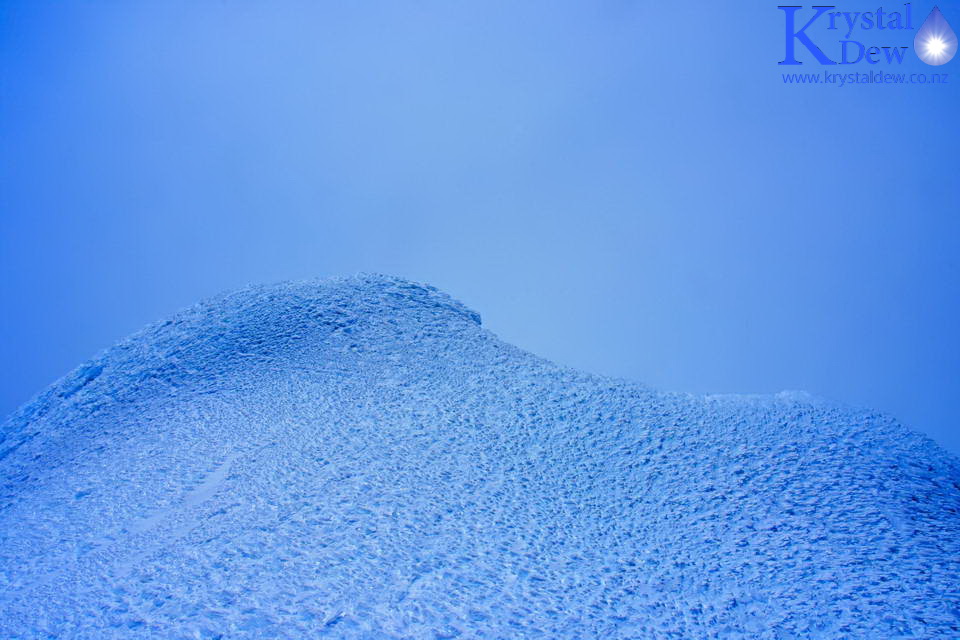 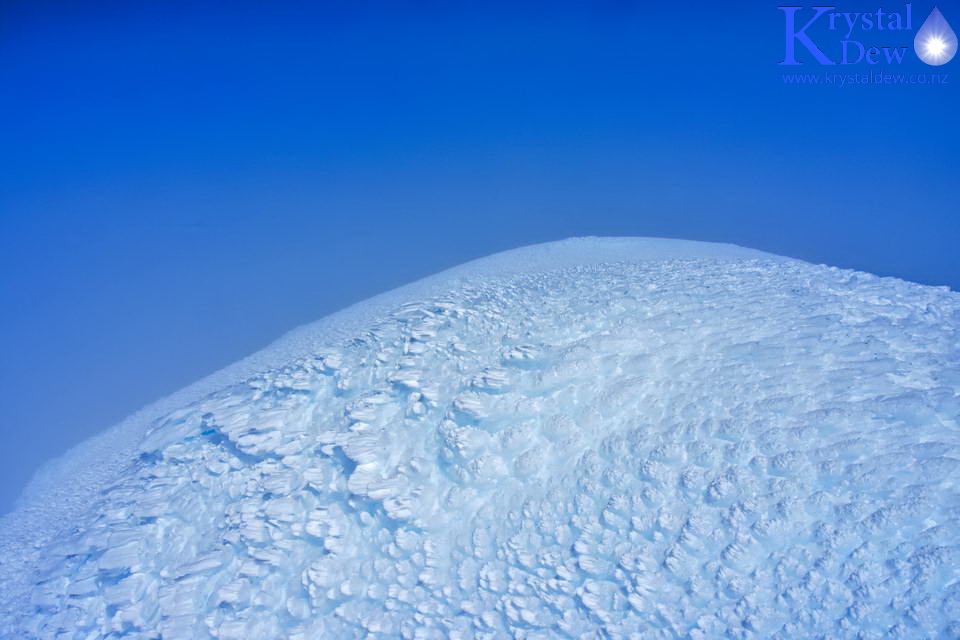 Looking south along the summit 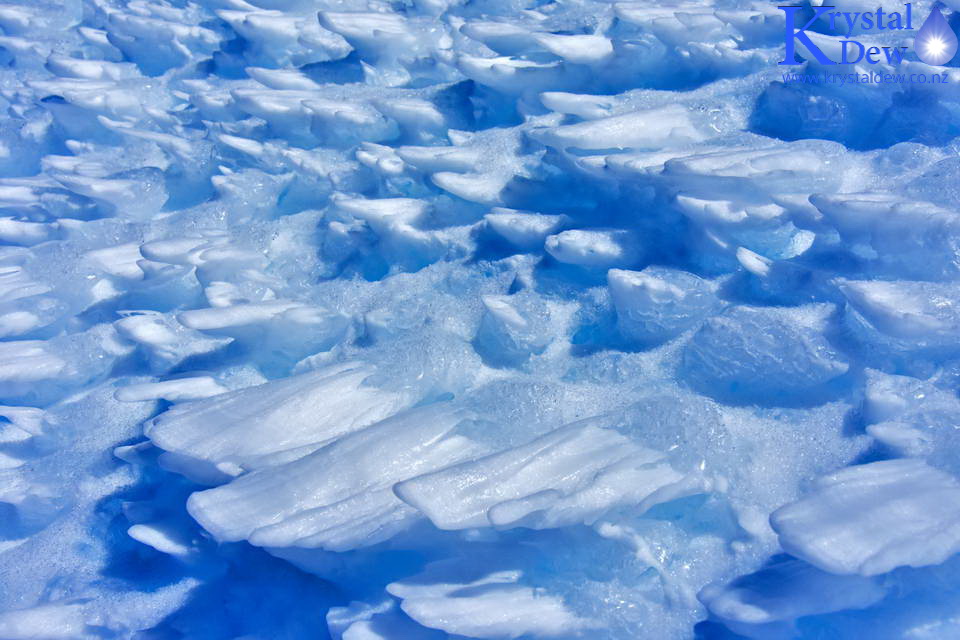 A close up shot of the ice crystals 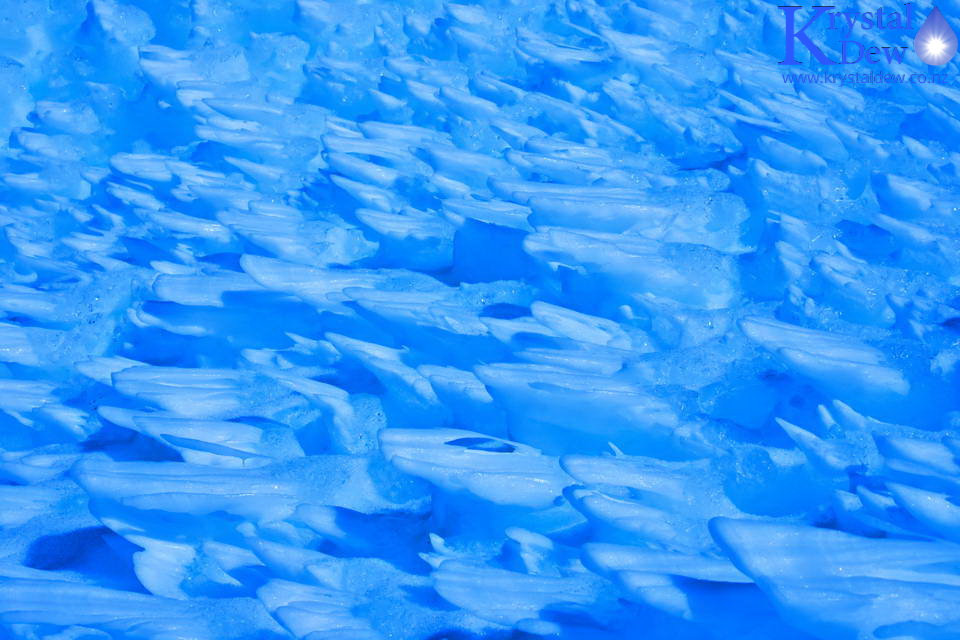 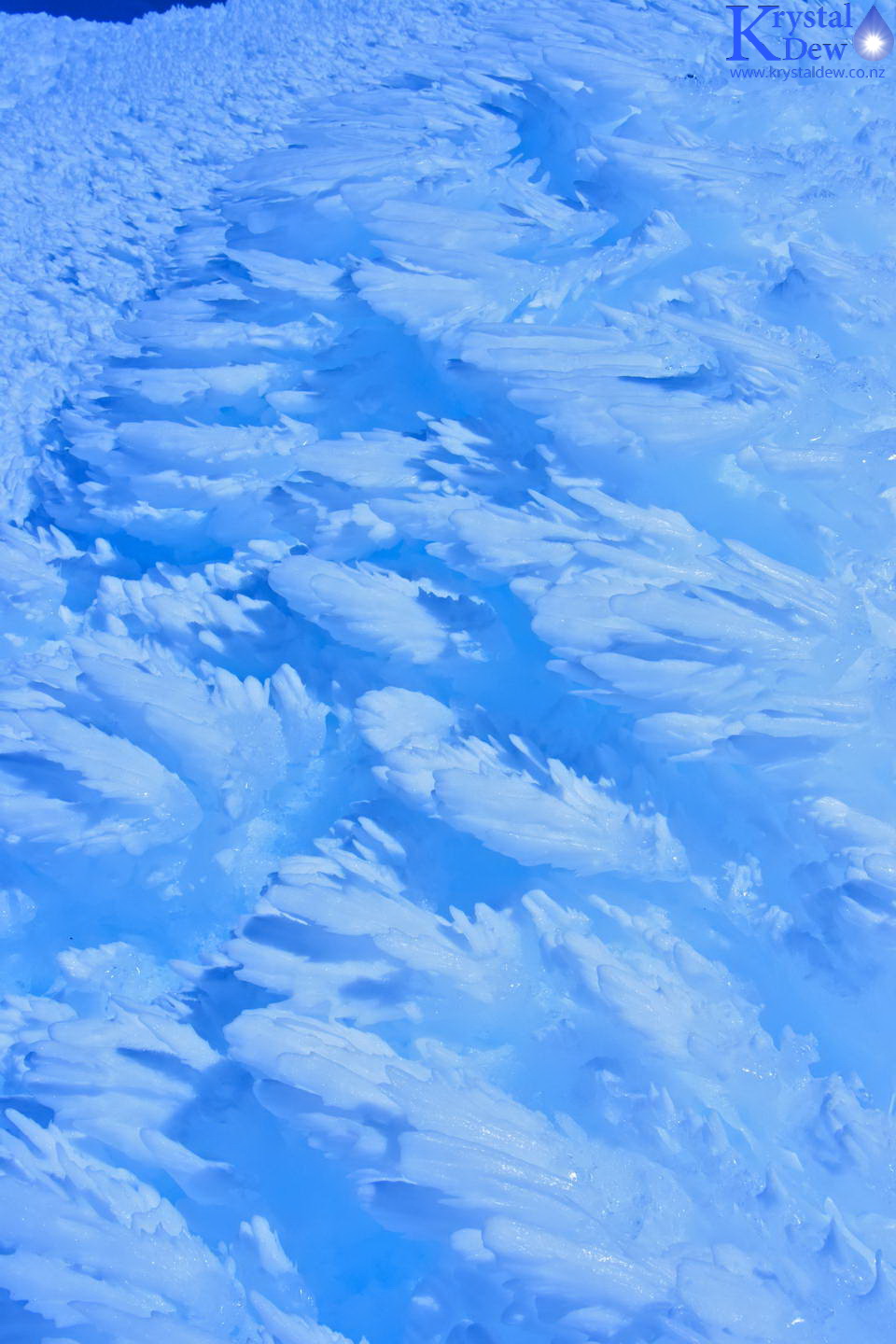 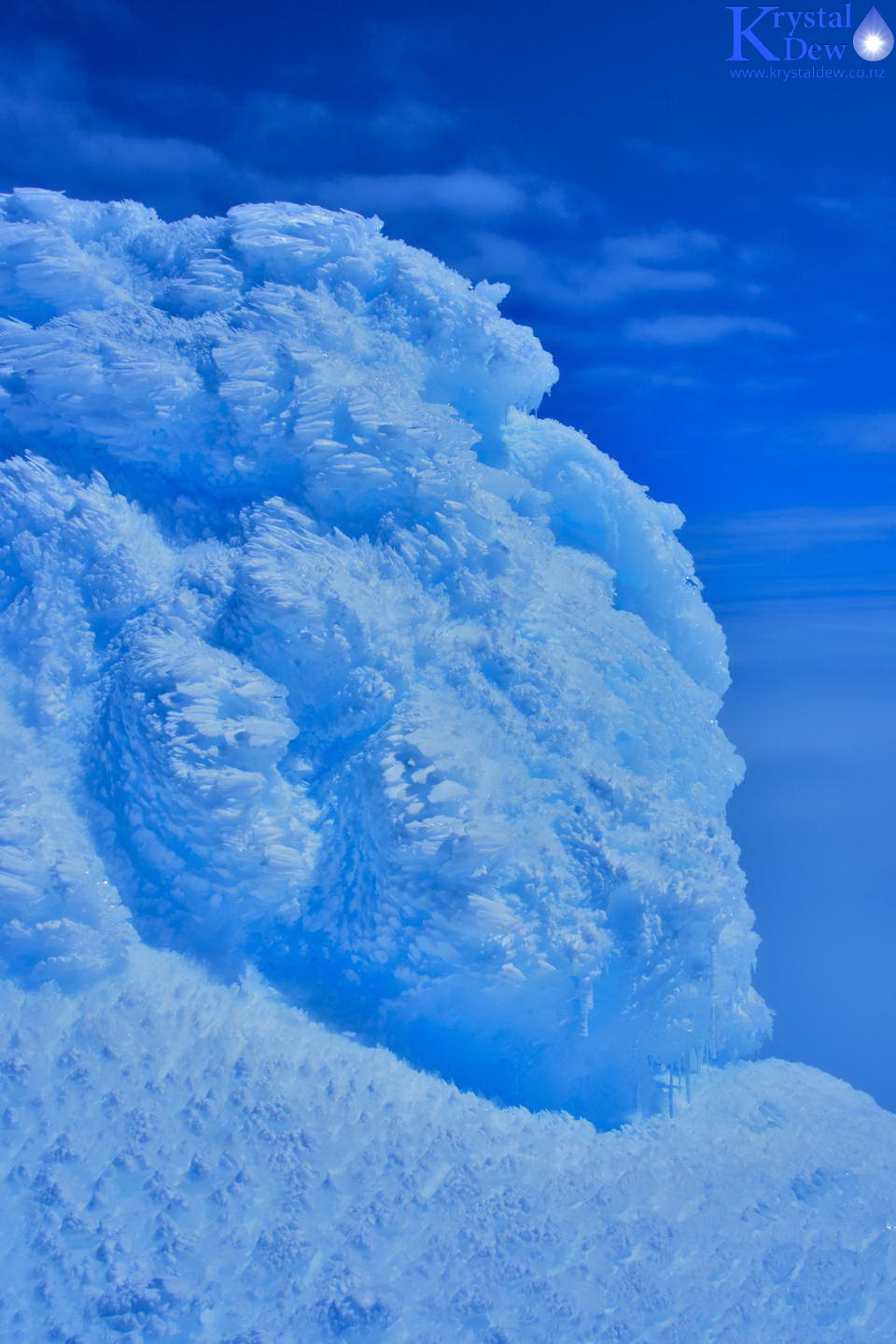 The northern side of summit rock covered in ice crystals 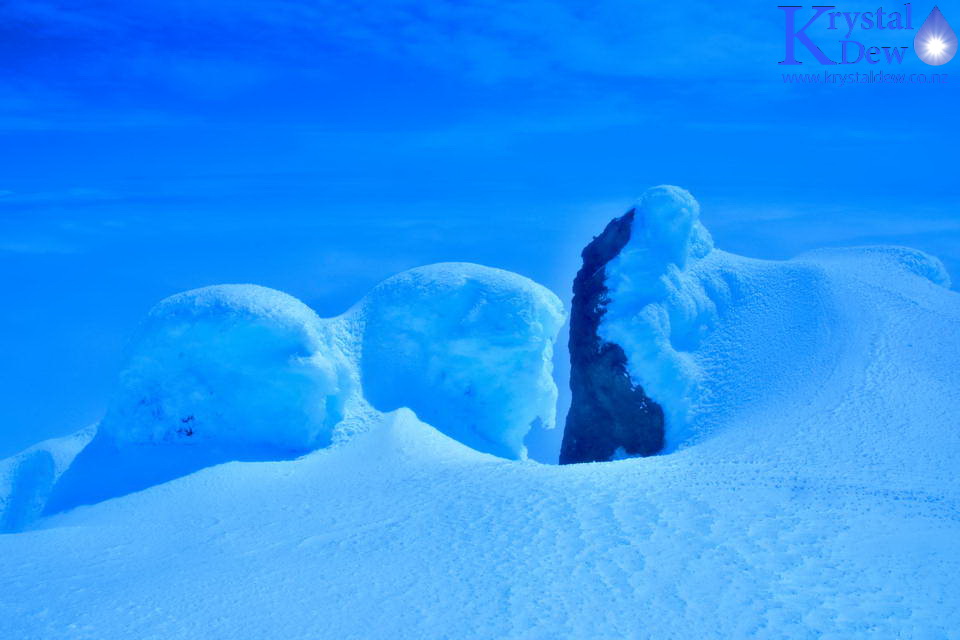 Snow covered rocks on the northern end of the summit 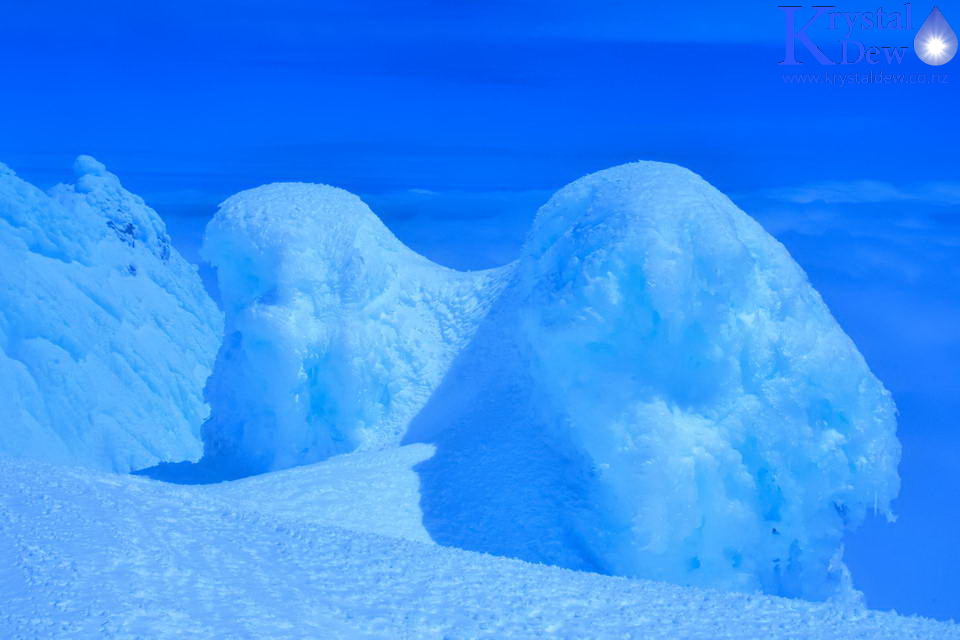 After a bit of a rest and some food I headed back down with the cloud closing in tighter creating white out conditions. I got down through crater valley and crossed the lizard and managed to pick up the poled track at the top of the scoria though at this stage the visibility was only a few meters.

Then I had a bit of a misadventure. I though I was keeping the scoria to my left and decnding into snow valley but it turned out there was a tongue of snow crossing through the scoria so in the white out I unwhittlingly crossed over the scoria and decended down the wrong valley ending up somewhere down around Amberly bluff. As the snow ran out I finaly realised that I had gone seriously adrift with my direction but couldn't figure out where I was exactly or where I had gone wrong. Initially I thought I had crossed snow valley in to the top of Hongis valley but nothing seemed familiar though it was hard to see anything clearly because of the white out conditions

I realised there was nothing else for it but to retrace my steps and climb back up until I recognised some familiar land marks. I was already pretty knackered so it was hard work climbing back up.  An hour and a half later I was back near the top of the scoria and realised how I had gone wrong. The cloud lifted a bit and I could see that I had crossed through the poled track at a point where a couple of poles had fallen over. Anyway having gotten my bearings I was soon running down the soft snow to the bottom of snow valley, eventually getting back to the car at 7:00pm after a much longer climb than I had ever expected.